navalpost
Home Miscellaneous The Royal Saudi Navy handed over command of CTF152 to the Kuwait... 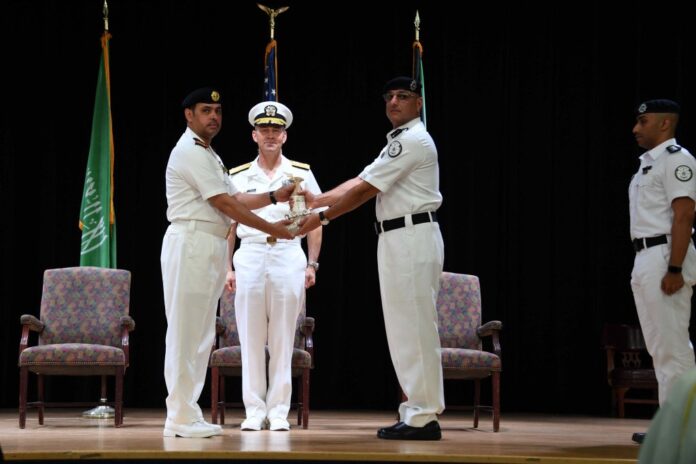 The Royal Saudi Navy (RSN) today handed over command of Combined Maritime Forces (CMF) Combined Task Force 152 (CTF152) to the Kuwait Coast Guard (KCG). This took place at a formal ‘Change of Command Ceremony’ at the CMF Headquarters in Bahrain.
This is the first time a CTF is under the command of a coastguard. Kuwait has had a constant presence in CMF with her Navy previously commanding CTF152 in 2009 and 2012, and thus, sharing their excellent knowledge of local maritime affairs in the Arabian Gulf.
Captain Albader RSN hands over the dagger of command to Captain Alfodary KCG under the watch of Vice Admiral Stearney, USN and Commander of CMF.
The ceremony was presided over by Vice Admiral Scott Stearney USN, Commander US Naval Forces Central Command, Commander US Fifth Fleet and Commander Combined Maritime Forces.
CTF152 are responsible for maritime security and counter terrorism within the Arabian Gulf, as well as building cooperation between Gulf Cooperation Council (GCC) countries and the wider CMF. While the Kuwait Coastguard will have command, they have military personnel from Bahrain, Jordan, UAE, Saudi Arabia, the UK and the US on the staff, making them a true coalition, working together to enhance regional maritime security.