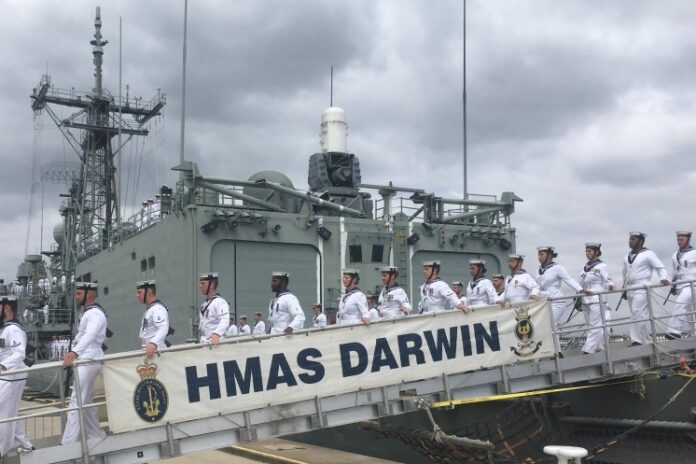 The Royal Australian Navy has decommissioned the Adelaide Class frigate, HMAS Darwin, at her homeport of Garden Island, Sydney, after more than three decades of service to the nation.
In a ceremony full of tradition, Chief of Navy, Vice Admiral Tim Barrett, paid tribute to the service of the ship’s company past and present.
“Darwin has laid down a proud history over her 33 years,” Vice Admiral Barrett said.
“The ship and her successive companies have served Australia with distinction, being awarded battle honours three times for successful maritime security operations.
Since commissioning in 1984, Darwin has steamed over a million nautical miles, visited more than 50 countries, and undertaken operations in the Middle East, East Timor, and the Solomon Islands.
The Commanding Officer of Darwin, Commander Phillip Henry, said lowering the Australian White Ensign for the final time closes a significant chapter in Navy’s history.
“The 5000 men and women who have served in Darwin will always carry fond memories of this ship,” Commander Henry said.
“We share this pride with many of Darwin’spast crew members who joined us to pay a final tribute to this Navy workhorse.”
Darwin is being decommissioned to make way for the Hobart class guided missile destroyers, which provide Australia with an improved warfighting capability.