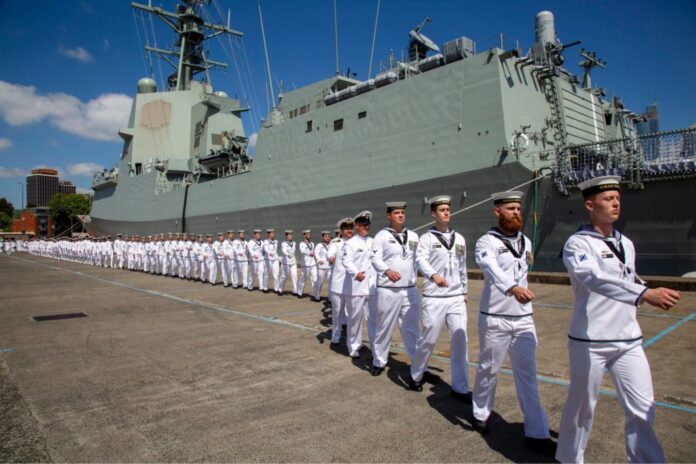 The Royal Australian Navy welcomed a new ship into the fleet today (Oct 27) , with the commissioning of the guided missile destroyer, HMAS Brisbane (III). In the ceremony at the Garden Island Naval Base in Sydney, the Brisbane officially became one of Her Majesty’s Australian Ships.
Before an audience of dignitaries, family and friends, the Commander of the Australian Fleet, Rear Admiral Jonathan Mead, AM, RAN, welcomed Brisbane to the fleet.  The Australian White Ensign was hoisted signifying completion of the commissioning. The crew marched onboard for the first time, where they cheered ship, as a mark of honour.
The Prime Minister of Australia, the Honourable Scott Morrison, MP and Minister for Defence, the Honourable Christopher Pyne, MP attended the ceremony, and noted the importance of the occasion for both Australia’s national security and domestic shipbuilding capability. The commissioning marks a major milestone in the life of the ship, and the Government’s multi-decade commitment to enhance the Navy’s capabilities to protect our maritime interests.
The second of three Hobart class guided missile destroyers, Brisbane is the third ship to carry the name.
Brisbane will now undergo her test and evaluation period where she will integrate into the fleet and Navy personnel will train to operate the warship.
Brisbane will provide air defence for accompanying ships, in addition to land forces and infrastructure in coastal areas, and for self-protection against missiles and aircraft.