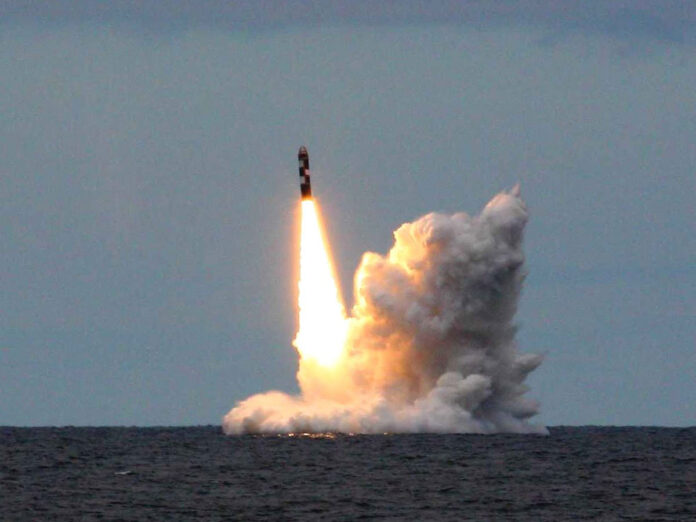 According to the report of Russia’s Defense Ministry on Wednesday(30th Oct), The Project 955A (Borei-A-class) lead nuclear-powered submarine Knyaz Vladimir (Prince Vladimir) fired a Bulava ballistic missile for the first time during trials in the White Sea.

“For the first time ever, a seaborne Bulava ballistic missile was test-fired from the latest Project Borei-A strategic missile-carrying submarine Knyaz Vladimir,” the ministry said.

The submarine launched the Bulava missile from its submerged position during its planned trials. The sub launched the missile from the White Sea towards the Kura range in the Far Eastern Kamchatka Region, the ministry added.

The Bulava missile’s flight proceeded in the normal mode and “its dummy warheads reached the range within the established time, which was registered by data recording equipment,” it said.

The missile firing area was closed for shipping and vessels of the Northern Fleet’s Belomorskaya naval base provided the security regime.

As Northern Fleet Commander Vice-Admiral Alexander Moiseyev earlier told TASS, the submarine Knyaz Vladimir is completing its state trials this year, during which all its armament will be tested. As the commander specified, the sub is due to be delivered to the Navy “on the eve of the New Year,” i.e. in December. The submarine will be operational in the Northern Fleet, the vice-admiral said.

By now, the Sevmash Shipyard in northwestern Russia (part of the United Shipbuilding Corporation) has built and delivered three baseline Project 955 Borei-class strategic submarines to the Navy. The lead submarine Yuri Dolgoruky has entered service with the Northern Fleet, while two serial-produced subs Alexander Nevsky and Vladimir Monomakh are operational in the Pacific Fleet.

The Project 955 and 955A submarines have been developed by the Rubin Central Design Bureau for Marine Engineering. The Sevmash Shipyard continues building four Project 955A submarines (the Knyaz Oleg, the Generalissimus Suvorov, the Emperor Alexander III and the Knyaz Pozharsky).

The Knyaz Vladimir is the first strategic underwater cruiser built under the renewed Project 955A (it was floated out in November 2017). According to Russia’s Defense Ministry, the sub features better acoustic stealth, maneuvering and deep-sea running capabilities and an improved armament control system.

All Borei-class submarines can carry 16 Bulava missiles and are also armed with 533mm torpedo tubes.