navalpost
Home Exercises The missile competitive assessment of the (PLA) Navy kicked off in waters... 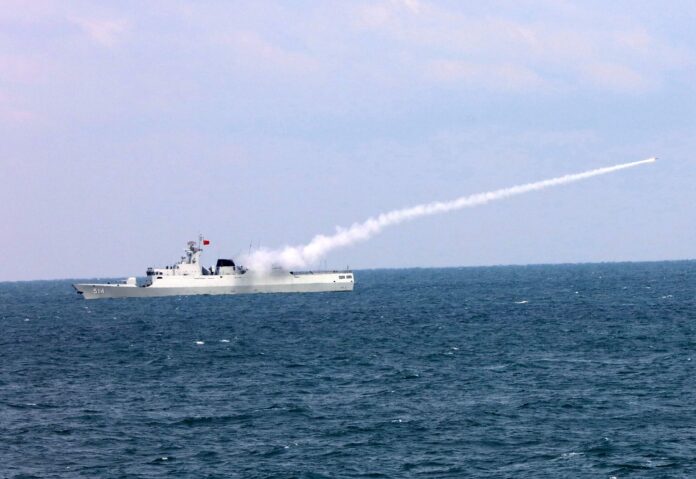 The missile competitive assessment of the Chinese People’s Liberation Army (PLA) Navy kicked off in waters of the East China Sea on the morning of Dec 7, 2017.
More than 40 vessels attached to the three naval fleets of the PLA Navy carried out live-fire anti-missile and air defense training exercises. The competitive assessment was aimed to test the air defense and anti-missile training quality of the Chinese PLA Navy’s surface vessel troops.
As the assessment began, the guided-missile frigate Putian (Hull 523) entered the designated sea area first, launched the target missile and left quickly, and then the guided-missile frigate Huai’an (Hull 509) was ordered to search for and fend off the incoming target missile.
Chen Shengqi, staff officer at the staff department of the PLA Navy, told the reporter that the competitive assessment used a kind of mainstream anti-ship missile as the target missile and aimed to test the terminal anti-missile capability of a certain type of surface vessel.
According to Chen, the participating vessels were randomly selected from the three fleets of the PLA Navy. They had to continuously fight against multiple targets at ultra-low altitude, judge the air defense effects by themselves, and organize intercept operation again based on the actual situation.
During the assessment, a number of experts from the PLA Navy’s training departments, research institutes and colleges analyzed in real time the data transmitted back from the target missiles, target planes and vessels, and accurately judged the launch time, flight status and interception effect of the air defense missiles.