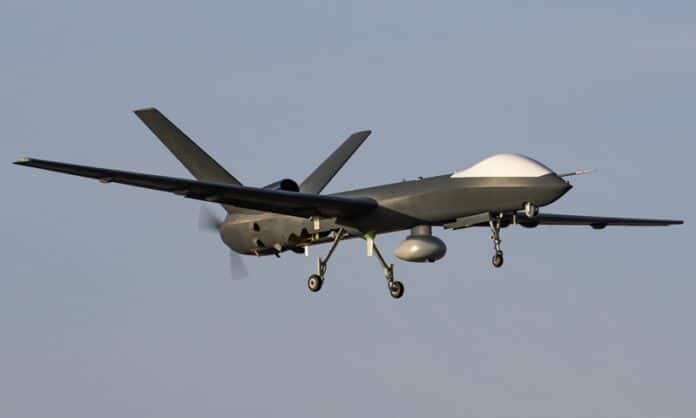 China recently conducted the first flight test of a maritime version of the domestically developed CH-5 drone. The new version of the CH-5 drone is a medium-to-high altitude, long-endurance large drone system that can cope with complicated and dynamic oceanic conditions.

The drone system could host various payloads, including electro-optic systems, search radars. It specifically developed for sea conditions. Compared to the standard version of the CH-5, the maritime version was improved to cope with high-temperature, humid and salt fog situations at sea. For instance, connectors of parts were replaced with titanium to adapt to maritime environments.

CASC Rainbow (Cai Hong, abbreviated as CH) is a series of unmanned aerial vehicles (UAVs) developed by the China Academy of Aerospace Aerodynamics of China Aerospace Science and Technology Corporation (CASC), also known as the 11th Academy of CASC, or 701st Research Institute.

The CH-5 is the latest UCAV of the Rainbow series, with a wingspan of 21 metres, a payload of 1,000 kg, a maximum takeoff weight of over 3 tonnes, a service ceiling of 9 km, an endurance of up to 60 hours and a range of 10,000 km. It conducted its maiden flight in August 2015. The drone can carry 16 missiles at a single time. There were also plans to extend its range up to 20,000 km. Chinese officials claimed the CH-5 Rainbow was similar in performance to the US MQ-9 Reaper and “may come in at less than half the price.” Compared to the Garrett TPE331 turboprop engine mounted on the Reaper, CH-5 is equipped with an unidentified turbo-charged piston engine, with less than half the horsepower. This choice limits the maximum altitude of the CH-5 to 9 km compared to the 12–15 km of the Reaper, but it also extends CH-5’s endurance to 60 hours compared to 14 hours of the Reaper’s. Future blocks of CH-5 will be able to stay in the air for up to 120 hours.