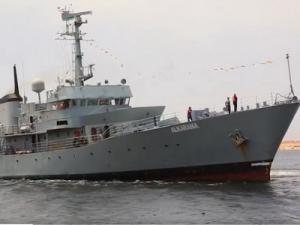 The Libyan National Army (LNA) has taken delivery of the flagship Al-Karama (Dignity) offshore patrol vessel, the former Irish vessel Aisling.
The LNA released a video on May 17 showing arrival of the vessel at Benghazi naval base. It was welcomed by the head of the LibyaNnavy, Commodore Faraj Al-Mahdawi Al-Tarhouni, military advisor Major General Abdullah Aoun and other dignitaries.
The Libyan National Army, led by Khalifa Haftar, controls much of eastern Libya, and named the new vessel after the operation to secure Benghazi in 2014. “The arrival of this vessel is a qualitative leap for our fleet and another success of our armed forces added to the chain of successes locally and internationally,” the LNA said, adding the vessel would be used to protect Libya’s territorial waters and fight against terrorism, human trafficking and illegal immigration.
L’E Aisling was built in Ireland in 1979 and from 1980 was in Irish Naval Service as a patrol vessel until decommissioned in June 2016. It was sold to Dutch broker Dick van der Kamp for 110 000 euros in March 2017 and subsequently offered for resale for 685 000 euros. The vessel sailed over 650 000 nautical miles during its years of active service.
According to IHS Jane’s, the Aisling was re-registered by Universal Satcom Services FZE based in the United Arab Emirates (UAE) in April. It sailed through the Strait of Gibraltar at the beginning of May on its delivery voyage.
The Emer class offshore patrol vessel is 65 metres long and displaces 1 020 tons. Top speed is 31 km/h and crew complement is 46. She was armed with a 40 mm main gun, two 20 mm cannons, and two 7.62 mm machine guns but it appears she was delivered to Libya without weapons.