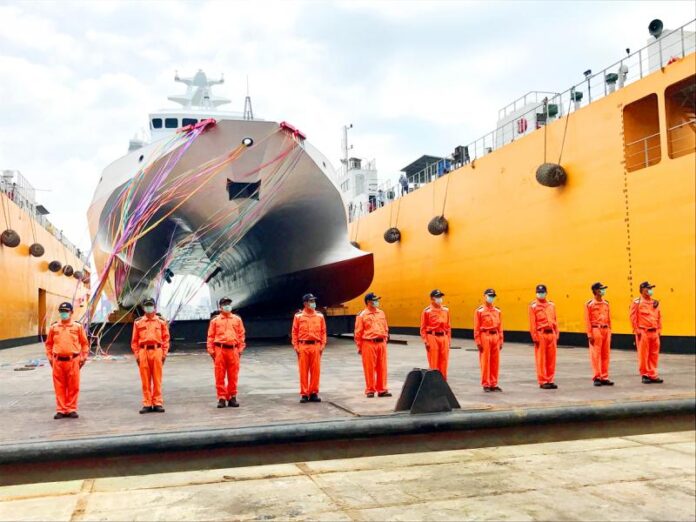 The Coast Guard Administration (CGA) of Taiwan unveiled its first domestically built 600-tonne patrol vessel, the Anping, at a ceremony in Kaohsiung on April 27.

Construction of the ship, based on the design for the navy’s Tuo Chiang-class corvettes, began in January last year. Work on a second patrol vessel began later in the same year.

Yesterday’s ceremony also marked the start of work on a third 600-tonne patrol vessel, as well as a third 35-tonne vessel for the CGA.

Similar to the Tuo Chiang-class ships, the Anping has a large deck and retains the launchers for Hsiung Feng II and III missiles, CGA fleet branch head Ching-chin said.

However, it differs from the Tuo Chiang in its added facilities and equipment for rescue operations, he said.

The vessel is capable of speeds of up to 40 knots, and would greatly increase the agency’s rescue and operations capabilities in the open seas, he said.

The CGA’s long-term plans call for a total of 141 new vessels of different classes, and the Anping is to be delivered in October — two months ahead of schedule, he said.

The government has budgeted NT$4.26 billion (US$141.9 million) for domestic shipbuilding, and hopes it can spur the shipbuilding industry while meeting the nation’s defense needs, Chen said.

Building 600-tonne CGA ships with missile launchers means that the nation’s defense capacity can be quickly boosted in the event of a war, he said.