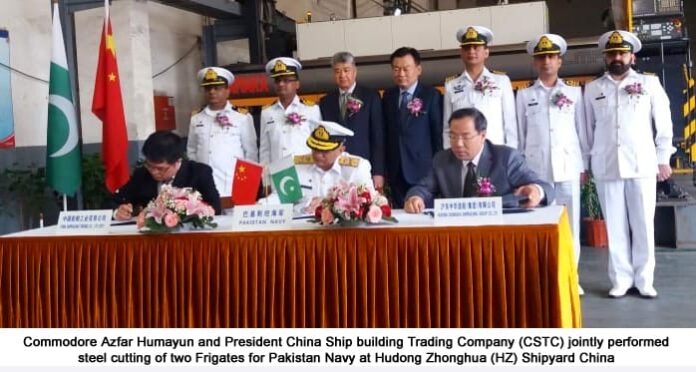 While speaking at the occasion, the Chief Guest highlighted that this programme is yet another manifestation of time tested and ever growing Pak-China friendship. He also acknowledged the commitment and dedication of CSTC team in this important programme.

Type-054 A/P ships are the state of the art frigates equipped with modern Surface, Subsurface and Anti air weapons and sensors. Once constructed, these ships will be the most technologically advanced platforms of Pakistan Navy which will strengthen its capability to meet future challenges and maintain peace, stability & power equilibrium in the Indian Ocean Region.

The ceremony was also attended by officers of Pakistan Navy and representatives/officials of China Shipbuilding Trading Company and Hudong Zhonghua shipyard.

The Type 054A frigate is a class of Chinese multi-role frigates, the first of which entered service with the People’s Liberation Army Navy Surface Force in 2007. It is a development of the Type 054 frigate, using the same hull but with improved sensors and weapons. This ship has a crew of 165 sailors including officers.

The stern helicopter deck features a single landing spot for supporting the missions of a medium-size helicopter. The heli-deck is fitted with helicopter handling system and can accommodate a Kamov Ka-28 Helix or a Harbin Z-9C helicopter.