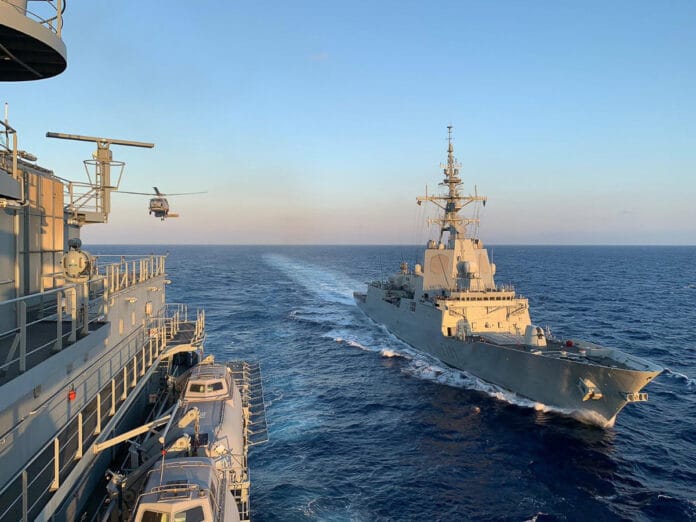 Standing NATO Maritime Group Two (SNMG2) Flagship, ESPS Alvaro de Bazan (F-101) has arrived in Rota Naval Base on 14 August after a month and a half of deployment in the Black Sea and the Eastern Mediterranean to undertake maintenance, rest and personnel changes, NATO Maritime command announced.

During the 20 days spent in the Black Sea, SNMG2 frigates from Romania, Spain and Turkey participated in exercises Breeze and Sea Breeze 2020, annual naval exercises organized by Bulgaria and Ukraine, respectively.

During its maritime patrols across the Mediterranean Sea, SNMG2 flagship has carried out exercises with different naval units from three Allied navies – Turkey, Greece and Germany.

SNMG2 has also intensified its internal interoperability, by enhancing cooperation between the flagship and the SNMG2 Task Unit 1 operating in the Aegean Sea, in particular with the ship in the lead of the Aegean activity, FGS Berlin.

The stop in Rota will provide Alvaro de Bazan an opportunity for maintenance and to rotate personnel, including, the ship’s flight crew and Marine force protection team. It will also allow for some crew rest. COVID-19 has prevented crews from exercising liberty ashore in previous ports but Rota will provide an opportunity for a more controlled rest period with facilities on the base, including organized sporting events.

“After an intense programme of activities under strict COVID prevention measures, the port call in Rota is an operational necessity to provide a well-earned period of rest to the crew, and undertake sustainment activity. However, SNMG2 will remain a COVID free high readiness force able to support NATO as and when required, “ said Commander of Standing NATO Maritime Group Two, Rear Admiral Aguirre.

After leaving Rota, SNMG2 will resume its program of activities in the Mediterranean Sea, including participation in major multi-national maritime exercises, maritime surveillance operations and support to Operation Sea Guardian, as well as continued cooperation with Allied and Partner Navies.