A new training facility opened on Wednesday (Sept 26) at Tuas Naval Base, to better prepare sailors for operations on Singapore’s warships.
The simulation centre, or SIMCEN, was opened alongside the commissioning of RSS Justice and RSS Indomitable – the navy’s fourth and fifth littoral mission vessels (LMV) to turn operational.
The centre is named RSS Daring to pay homage to those who stood guard over Singapore’s waters, and to also remind the Navy personnel of the vital need to defend Singapore.
RSS Daring was one of two fearless-class patrol vessels that were designed and built in Singapore. It was commissioned in 1997, and subsequently decommissioned in July.
The facility will use technology such as virtual reality and artificial intelligence. This will shorten the training time for each ship by up to 60 per cent, making it more efficient.
SIMCEN was jointly developed by the Republic of Singapore’s Navy and the Defence Science and Technology Agency. Two simulation halls will replicate the LMV’s integrated Command Centre, giving a 360-degree view around the ship. 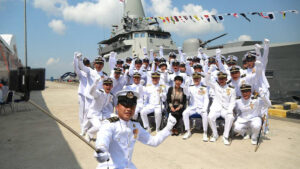