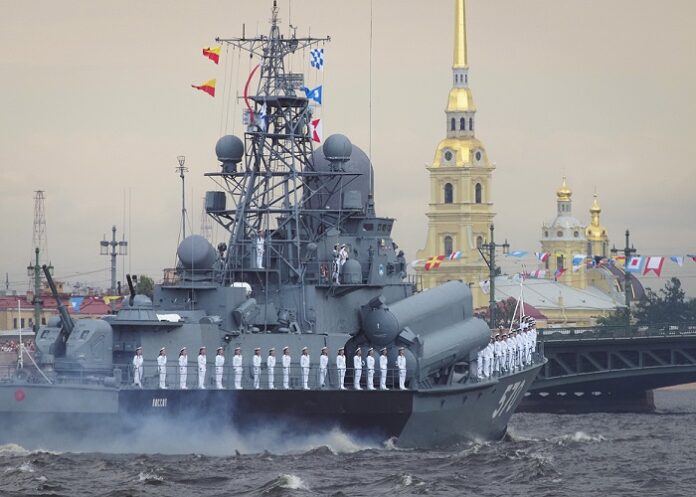 Is the great navy dream of Grand Petro coming true?

Putin knows that the way to become a global power is through a great naval power. He seems to realize the great navy dream of the Grand Petro and announces it to the world with ceremonies.

After lots of preparations and deployments, Russian Naval Parade for Russian Navy Day-2019 was conducted at 6 different ports on 28th July. The main celebration was held in St.Petersburg (leaded by President Putin), and other parades have been held at Baltiysk, Sevastopol, Severomorsk and Astrakhan, as well as in the Syrian port of Tartus. Prime Minister Medvedev attended the parade at Sevastopol.

Russia made a significant show of navy power today. Of course these parades are not just to celebrate something, at diplomatic look, celebrating such days with a great enthusiasm and power is a message to rivals. Especially making parade at Sevastopol, that was annexed on 2014 in spite of objections of Ukraine, U.S. and European Union, seems to be a conscious move. Moreover, planning such parade at Tartus port could be a message to rivals at East Mediterranean that “I am here”.

As we mentioned at the beginning, Russian President Vladimir Putin, Supreme-Commander-in-Chief of the Russian Armed Forces, is reviewing the Main Naval Parade in St. Petersburg. Navy Commander-in-Chief Admiral Nikolai Yevmenov reported to the president that the ships were ready for the parade. The main parade was kicked off on the Neva River with the participation of the latest Admiral Kasatonov frigate, the Gremyashchiy corvette, the Kronshtadt submarine of project 677, the Mytishchi and the Serpukhov small missile ships and the Ivan Antonov minesweeper.

Then, the celebrations moved on to Kronshtadt, where amphibious Be-200 airplanes, an A-50 long-range radar surveillance aircraft, as well as Su-30SM fighter jets will fly over the Neva River and the Gulf of Finland.

Prior to that, the president sailed aboard a boat past the warships lining up for the parade in Kronshtadt, greeting their crews. He was accompanied by Defense Minister Sergey Shoigu and Navy Commander-in-Chief Nikolai Yevmenov,

The parade of warships in the Bay of Sevastopol was reviewed by Black Sea Fleet Commander Igor Osipov.

Lining up in the bay were the submarine Novorossiysk, the air-cushion missile ship Samum, the frigate Admiral Makarov, the missile gunboat R-60 and other warships.

At the celebration of the Russian Navy Day in Sevastopol, spectators would for the first time see raising of the flag of the Russian Imperial battleship Imperatritsa Mariya, which was the flagship in the legendary Battle of Sinop in the course of the Crimean War (1853-1856). The flag raised on a pole next to a 19th century cannon, which was fired to open the festivities in the Bay of Sevastopol.

One of the most remarkable evenst about Russian Navy day is the parade held in Tartus Port. A Russian submarine and missile ships took part in a naval parade marking Russia’s Navy Day in the Syrian port of Tartus on Sunday, the Defense Ministry’s press service said in a report.

“The diesel-electric submarine Stary Oskol, the Admiral Grigorovich frigate, the Pytlivyi patrol ship, the Velikiy Ustyug and Uglich small missile ships” took part in the parade along with other vessels, the press service said.

The air parade involved Su-24M bombers, Su-34 and Su-35 jets, Mi-8AMTSh and Mi-35M helicopters that flew over the port, the press release said.

A ceremony to award sailors and ship crews took place onboard the Admiral Grigorovich frigate.