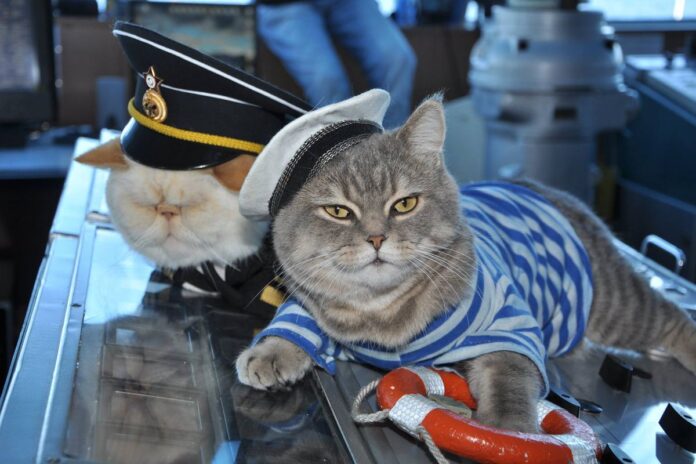 The ship’s cat has been a common feature on many trading, exploration, and naval ships dating to ancient times. Cats have been carried on ships for many reasons, most importantly to control rodents. Vermin aboard a ship can cause damage to ropes, woodwork, and more recently, electrical wiring. In addition, rodents threaten ships’ stores, devour crews’ foodstuff, and can cause economic damage to ships’ cargo, such as grain. They are also a source of disease, which is dangerous for ships that are at sea for long periods of time. Rat fleas are carriers of plague, and rats on ships were believed to be a primary vector of the Black Death.

Cats naturally attack and kill rodents, and their natural ability to adapt to new surroundings made them suitable for service on a ship. In addition, they offer companionship and a sense of home, security and camaraderie to sailors away from home.

Cats have a natural reaction to barometric pressure changes. So, if you come to know the habits of an on-board cat very well, once they start to take an unusual liking to shelter, you can intuit a storm is incoming.

According to the US Naval Institute, the ancient Egyptians were the first seafarers to realize the true value of having cats as shipmates.” At sea, especially during a time of war, food supplies had to be guarded as seriously as the hull of the ship. That job often fell to felines.

The study was presented at the International Symposium on Biomolecular Archaeology in Oxford, UK back in 2016, cats sailed with Vikings to conquer the world.

A good example here is Tiddles, who was born on HMS Argus and later joined HMS Victorious. In 1940 became the official Captain’s Cat on HMS Victorious. In his years in service, he travelled over 30, 000 miles.  He was often seen at his favourite station, on the aft capstan, where he would play with the bell-rope.

Another, Able Seacat Simon, was the official capt on HMS Amethyst from 1948, winning two awards in 1949, including the prestigious Dickin Medal (posthumously) which almost always went to pigeons or dogs. Simon was hit by shrapnel when his ship was hit by the PLA in 1948, he was only found 8 days later and treated. But even before he healed, on the first day alone, he had two confirmed kills. He was buried with full military honors when he died.

Unsinkable Sam (also known as Oskar or Oscar) was the nickname of well known ship’s cat from World War II. He was a black a white patched cat and was said to be owned by a crewman who served on the battleship Bismarck. When the Bismarck sunk on the 27th of May, Unsinkable Sam was found in the water floating on a board. He was picked up by crewmen of the British ship HMS Cossack, where he was names as their new mascot “Oscar”.

Oscar went on to survive two more ship wrecks, earning him the nickname “Unsinkable Sam”. He was on boar the Cossack when it was severely damaged by a torpedo and later on the HMS Ark Royal, which also suffered damage by torpedo fire.

After the loss of HMS Ark Royal, Sam was sent first to Gibraltar an then to the United Kingdom. Before his death in 1955, Unsinkable Sam lived out his reaming years with a seaman in Belfast.

Blackie was the ship cat for HMS Prince of Wales, a King George V-class battleship of the Royal Navy. The ship was involved in several important actions during World War II, including the battle of Denmark Strait against the Bismarck, escorting convoys in the Mediterranean, and her final action and sinking in the Pacific in 1941.

Blackie achieved celebrity status after Prince of Wales brought Prime Minister Winston Churchill across the Atlantic to Newfoundland for a clandestine meeting for several days with Franklin D. Roosevelt. The result of their secret summit on the ship resulted in the signing of the Atlantic Charter. As Churchill prepared to disembark the Prince of Wales, Blackie swooped in for a cuddle, Churchill stooped down for a good-bye rub, cameras clicked, and the perfect politician-feline photo opportunity was captured … and gobbled up by the world media. In honor of the success of the visit, Blackie was renamed Churchill.

Most of the World navies banned cats and other pet animals from all ships on hygiene grounds. But some navies continue this tradition. We see cats on merchant ships usually.