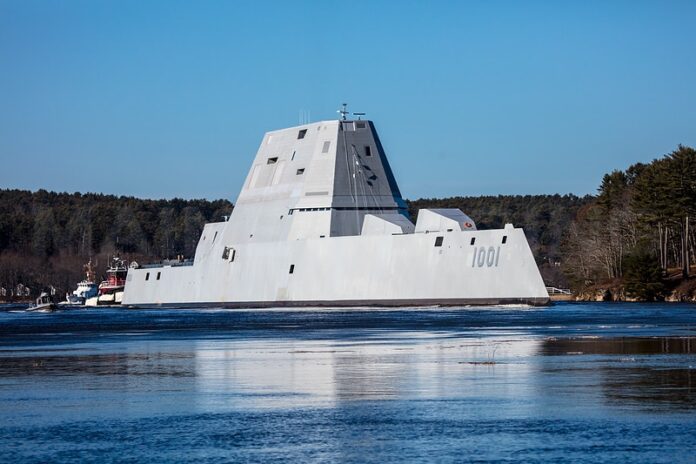 Zumwalt-class destroyer Michael Monsoor (DDG-1001) will need to have a main turbine engine replaced before the ship can sail to San Diego for its combat system activation, after suffering damage to the turbine blades during acceptance trials.

Rear Adm. William Galinis said today that Monsoor remained in Bath, Maine, for a post-delivery availability and that, “regrettably, coming off her acceptance trials we found a problem with one of the main turbine engines that drives one of the main generators; we’re having to change it out. So we’re working very closely with Bath Iron Works, with Rolls-Royce to get that engine changed out before she leaves Bath later this fall and sails to San Diego to start her combat system activation availability next year. ”MT30 marine gas turbine showed no signs of malfunctioning during the sea trials, but the damage was found in a post-trials inspection. The problem we had coming off of acceptance trials was actually the turbine blades – so think of a jet engine on the side of an airplane, the blades that you see – we actually had some dings, some damage to those turbine blades,” he said. “We found that after the sea trial through what we call a borescope inspection, where we actually put a visual and optical device inside the turbine to kind of look at this. And we determined that it was best to change that turbine out before we actually transited the ship to San Diego.” Monsoor completed acceptance trials in February, and the Navy accepted partial delivery of the ship in April. Galinis said part of the reason it has taken so long to replace the engine is that, with the MT30 being so large, a special rail system is needed to remove the engine and put in a new one. That system hadn’t yet been designed when the Navy realized it needed one, so engineers had to finish the design and then install the system.“So that’s what’s taken us a little bit,” the rear admiral said.