navalpost
Home Miscellaneous Russia’s Slava-class Cruiser Moscow’s repair to be completed at the end of... 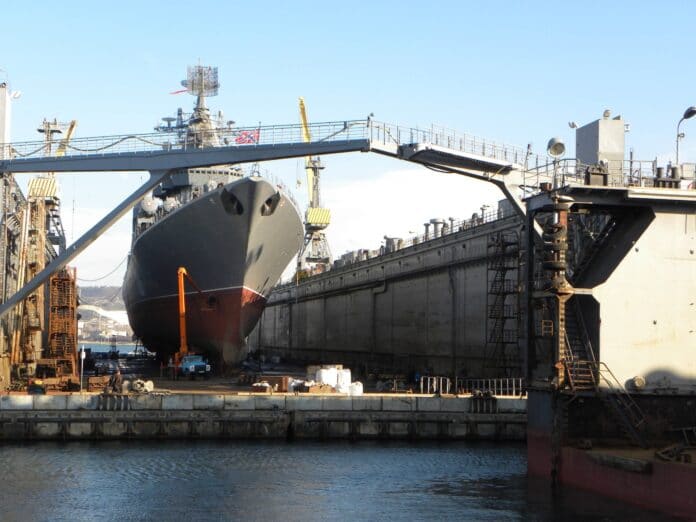 According to TASS agency of Russia, the dockside repairs of the guards missile cruiser Moskva, which is the Black Sea Fleet’s flagship, are scheduled to be completed on June 26, the press office of the 13th Ship Repair Plant announced on 18th May.

“The cruiser is now in the Northern dock of Sevastopol. The repair works are proceeding as planned. In accordance with the plan, the completion of the dock repairs is scheduled for June 26,” the press office said in a statement.

A source in the defense industry earlier told TASS there were plans to complete the Moskva’s repairs by June 20.

The missile cruiser was placed into the dock on April 22. As the press office of the 13th Ship Repair Plant said, the dock repairs are proceeding along with the warship’s maintenance, which is also being carried out by the shipyard’s personnel. Now specialists of the shipyard’s main production workshops are carrying out the bulk of the repair work, the press office said.

The cruiser Moskva is the Project 1164 ‘Atlant’ lead ship. It entered service in 1983. As its main armament, the warship carries 16 launchers of P-1000 Vulkan missiles.

In the second half of 2015, the cruiser led the Russian Navy’s permanent Mediterranean taskforce, shielding Russia’s Hmeymim airbase in Syria with its air defense weapons. On July 22, 2016, the cruiser Moskva was awarded the Order of Nakhimov.