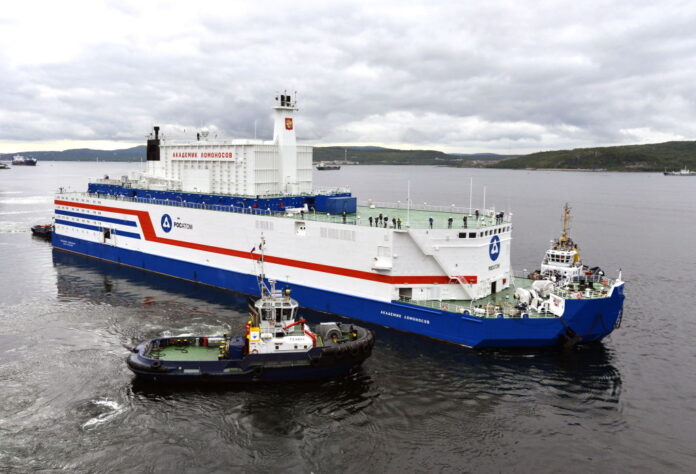 We easily guess that an average person would be irritated when read the title of the article. Nuclear race between Russia and U.S. and its reflections to the nature has a potential to cause irreversible results. There’s a famous cree Indian proverb : “When the last tree is cut down, the last fish eaten and the last stream poisoned, you will realize that you cannot eat money.” This issue is also same for the power. When the last fish dies, super-powered countries would understood that power is not an item to eat or an environment that provides you to live in.

After thinking in a philosophical way, we can move back to our subject. Russia’s first floating nuclear power plant set sail on Friday from the Arctic port of Murmansk to provide power to one of the country’s most remote regions, sparking environmental concerns.

Developed by the Russian state nuclear company Rosatom, the plant, known as “Akademik Lomonosov,” set off on a 5,000 kilometer (3,100 mile) journey through Arctic waters to reach the Chukotka region, which lies across the Bering Strait from Alaska.

The plant, loaded with nuclear fuel, will replace a coal-fired power plant and an aging nuclear power plant supplying more than 50,000 people with electricity in the town of Pevek.

Rosatom says the plant is safe and can serve as a new power source for the planet’s most isolated communities, but environmentalists have voiced concerns over the risk of nuclear accidents.

Greenpeace has called it the “nuclear Titanic.”

“We think that a floating nuclear power plant is an excessively risky and costly way of obtaining energy,” Rashid Alimov of Greenpeace Russia said.

He added the unit had not been built with the purpose of fulfilling the energy needs of Chukotka, but rather to serve as a model for potential foreign buyers.

Though we criticise, we wish fair winds and following seas for nuclear plant ship. Because if she would encounter dangerous conditions, it would be dangerous for the earth.