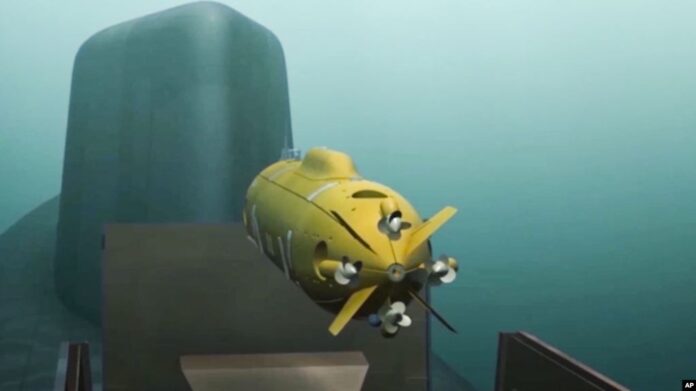 Russia’s special-purpose nuclear sub, the Belgorod, which will be the first basic carrier of Poseidon nuclear-capable underwater drones, will enter sea trials in June 2020 and will be commissioned in September, Sevmash shipyard Director General Mikhail Budnichenko told reporters on Monday (9th September).

“The vessel has already begun trials,” he said. “Besides, we have a schedule approved by the Defense Ministry, and the work is being carried out in strict compliance with this schedule.”

The Sevmash director general said the Belgorod is to take to the sea on June 15, 2020.

“In line with the schedule, the acceptance act is to be signed in September of the same year,” Budnichenko added.

In December 2012, the Sevmash shipyard began the construction of a special purpose submarine, designated Project 09852. It was based on the incomplete Project 949A (Oscar II class) submarine, the Belgorod. There is no data on the submarine’s current technical characteristics as of today.

In his state-of-the-nation address to both houses of Russia’s parliament on March 1 last year, Russian President Vladimir Putin mentioned for the first time the country’s efforts to develop a nuclear-powered unmanned underwater vehicle that can carry both conventional and nuclear warheads and is capable of destroying enemy infrastructural facilities, aircraft carrier groups and other targets.

Poseidon drones together with their carriers – nuclear-powered submarines – make part of the so-called oceanic multipurpose system. The drone got its name following the results of open voting on the website of Russia’s Defense Ministry.

According to reported data, the Poseidon will feature an intercontinental range capability and an operational depth of over 1 km.