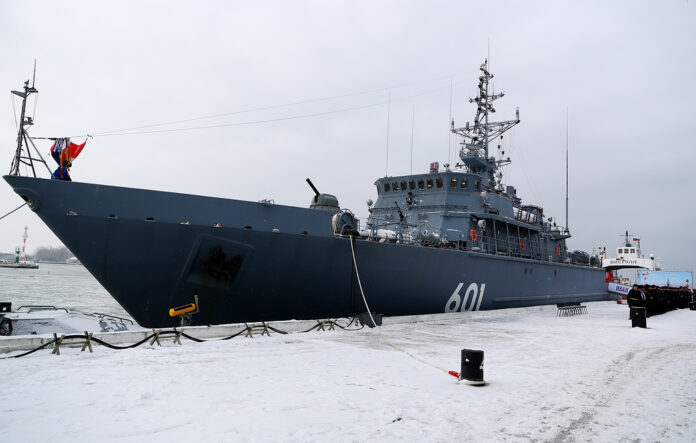 The Russian Navy’s newest minesweeper ship, project 12700 “Ivan Antonov” was commissioned on Jan 26 with a ceremony held at Baltiysk. The ship will serve as the part of the Crimean naval base of the Black Sea Fleet.

The ship is named after famous sniper, participant of the Great Patriotic War and hero of the Soviet Union, midshipman Ivan Antonov.

The contract for the construction of the sea base minesweeper “Ivan Antonov” was signed in April 2014. It was laid down at the Sredne-Nevsky Shipyard on January 25, 2017, and launched on April 25, 2018.

The project 12700 has a hull of fibreglass. The advantage of this solution is higher strength in comparison with steel hulls and have a low-magnetic-field. The displacement of the ships of the project 12700 is about 900 tons, the length is more than 60 m, the width is 10 m, the travel speed is 16.5 knots, the crew is 44 people. To combat mines, the ship can use various types of equipment as well as remote-controlled and autonomous underwater vehicles.