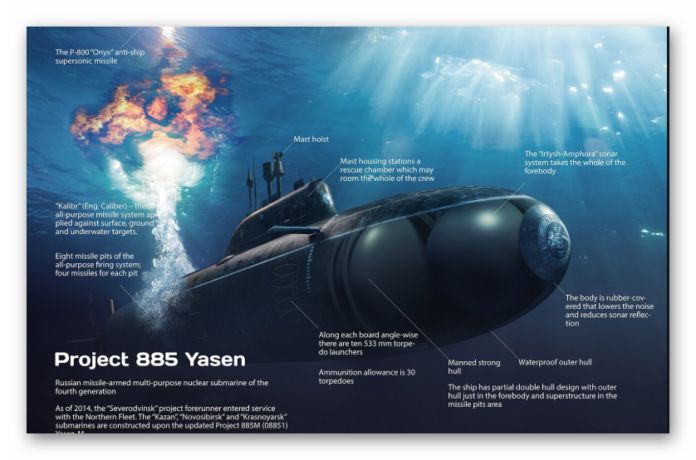 “The shipyard has a tight delivery program. This year, the Sevmash will deliver the nuclear-powered submarine Knyaz Vladimir to the Navy and next year it will hand over several more Yasen-M and Borei-A vessels,” the Sevmash chief said, replying to a question about the company’s plans for transferring nuclear-powered subs in 2019-2020.

Speaking about the timeframe for the start of the state trials of the Project 885M nuclear-powered submarine Kazan and the Project 955A Borei-A sub Knyaz Vladimir, the Sevmash chief said that the vessels of these series were undergoing shipbuilders’ sea trials this year.

As the Sevmash head noted, the submarines of these Projects will “enter the stage of state tests after the shipbuilders’ sea trials are over in accordance with the schedule.”

By now, the Sevmash Shipyard in northwest Russia (part of the United Shipbuilding Corporation) has built and delivered three baseline Project 955 Borei-class strategic submarines to the Navy. The lead submarine Yuri Dolgoruky has entered service with the Northern Fleet, while two serial-produced subs Alexander Nevsky and Vladimir Monomakh are operational in the Pacific Fleet.

The Project 955A (Borei-A) lead submarine Knyaz Vladimir (Prince Vladimir) is currently undergoing the second stage of shipbuilders’ sea trials. As the Sevmash chief executive earlier told TASS, the submarine is expected to be delivered to the Navy in December 2019. The submarine carries 16 R-30 Bulava intercontinental ballistic missiles as its main armament.

The Project 955 and 955A submarines have been developed by the Rubin Central Design Bureau for Marine Engineering. The Sevmash Shipyard continues building four Project 955A submarines (the Knyaz Oleg, the Generalissimus Suvorov, the Emperor Alexander III and the Knyaz Pozharsky).

According to open sources, Borei-A submarines feature an upgraded hull, new electronics and better stealth technology compared to their predecessors.

Project 955 and Project 955A underwater cruisers belong to the fourth generation of nuclear-powered submarines and are part of Russia’s nuclear triad. Borei submarines are armed with Bulava solid-propellant intercontinental ballistic missiles. Each submarine is capable of carrying up to 16 such ICBMs. The submarines will replace third-generation 667BDR strategic missile-carrying submarines in the Pacific Fleet and 667BDRM subs in the Northern Fleet.

The Sevmash Shipyard has built and delivered the baseline Project 885 Yasen-class submarine Severodvinsk to the Navy. It has entered service with Russia’s Northern Fleet. The improved Project 885M Yasen-M lead submarine Kazan is currently undergoing trials. Five more Project 885M submarines are at various stages of their construction.

The Project 885 and Project 885M submarines have been developed by the St. Petersburg-based Malakhit Marine Engineering Bureau.

A contract was signed at the Army-2019 military and technical forum for the construction of two more Yasen-M submarines.