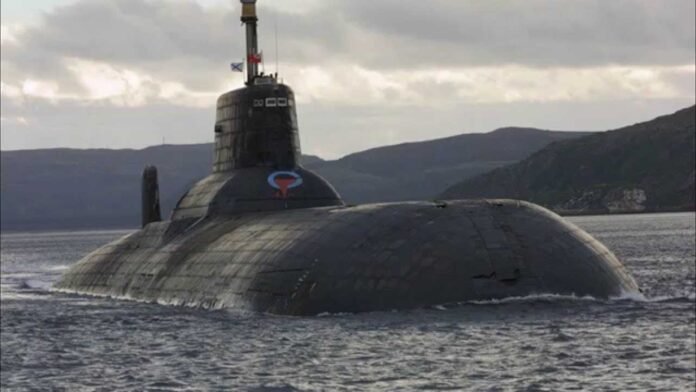 “As part of planned combat training measures, the naval anti-submarine strike group of warships from the Belomorsk naval base held a tactical exercise in the White Sea to search for a submarine … At some stages of this exercise, the crew of the heavy nuclear-powered underwater cruiser Dmitry Donskoi acted as an adversary force for the naval anti-submarine strike group,” the press office said in a statement.

Under the drills’ scenario, small missile ships Onega and Naryan-Mar practiced searching for, detecting and tracking a notional enemy’s submarine with the employment of all the available sonar systems, as well as anti-submarine maneuvering along different courses and at different speeds and dodging a sub’s torpedo attack, the statement reads.

“The drills culminated with a combat exercise to strike a simulated underwater target. The crews of each of the anti-submarine ships conducted depth bombing from RBU-6000 depth charge launchers,” the Fleet’s press office commented.

The crews of the small missile ships earlier accomplished the assigned missions of protecting and defending a caravan of ships and also successfully practiced the employment of weapons and electronic counter-measures against a simultaneous attack from the air and the sea.

The Dmitry Donskoi is the first Project 941 Akula-class vessel that has been in service with Russia’s Northern Fleet since 1981 and is also the world’s largest nuclear-powered sub. The Russian Navy used the submarine for the first test launches of the seaborne Bulava intercontinental ballistic missile.

The Dmitry Donskoi was the first among the nuclear-powered missile-carrying submarines to take part in Russia’s Main Naval Parade in Kronstadt in 2017. To appear at the naval parade, the underwater missile-carrying cruiser made the Russian Navy’s first ever transit in a surfaced position from the Kola Bay to the Gulf of Finland through the Baltic Sea straits and back.