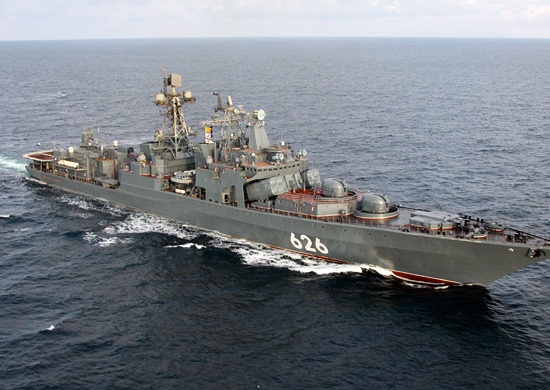 Russian destroyer Vice-Admiral Kulakov returns to Barents Sea from long voyage
Crew of the Russian Northern Fleet’s large antisubmarine warfare ship Vice-Admiral Kulakov has begun the final stage of the long voyage. On Saturday, the ship entered the Barents Sea, the Fleet’s press office reported.
“Within a few days, the navy will practice tasks at the Northern Fleet’s fields in the Barents Sea,” the press service said. “The official welcome of the crew will be at the Northern Fleet’s main base, Severomorsk, early next week.”
The Vice-Admiral Kulakov left the home base on June 29 jointly with the missile cruiser Marshal Ustinov to take part in the naval parade off Kronshtadt. In early August, the warship made a passage from the Baltic to the North Sea as part of a naval group.
The warship has been in distant waters for over three months and a half. From late August to mid-October, the crew of the Vice-Admiral Kulakov operated in the southern part of the Red Sea and the Gulf of Aden. The warship ensured Russia’s permanent naval presence in the region and safe merchant shipping. In the second half of October, the sailors performed missions in the Mediterranean Sea.