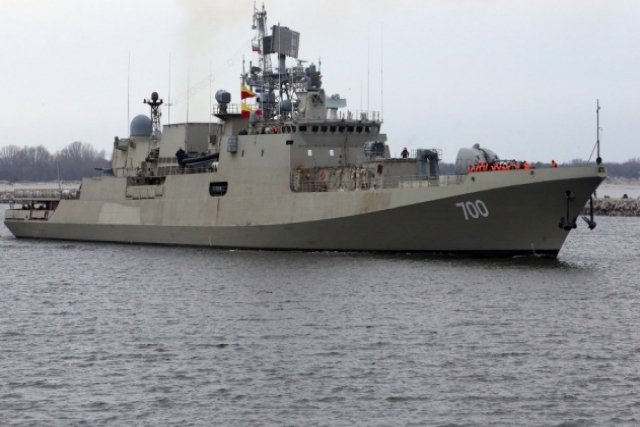 During his tour at the vessel in Russia’s northwestern city of Kaliningrad on Thursday (01 Nov) President Putin has declared that the corvette Gremyashchiy will be equipped with cutting-edge hypersonic anti-ship missiles Zircon.

Getting on board the corvette, the president examined it, as well as familiarized himself with the weapons systems and equipment. The corvette’s commander, Captain 2nd Rank Roman Dovgailov drew attention of the president to the bow section, where the launch containers for Kalibr missiles are located, saying that Tsirkon missiles could be placed there in the future.

“It will certainly have Tsirkon,” the president replied, addressing Defense Minister Sergei Shoigu. The minister smiled and nodded. Then, the president wished the commander happy sailing and successful state trials.

The work on the advanced Tsirkon hypersonic missile capable of developing a speed of up to Mach 9 is proceeding smoothly and will be completed on time, Russian President Vladimir Putin said during his annual Address to the Federal Assembly in February.

As the Russian leader reported, this missile is capable of developing a flight speed of about Mach 9 and its range capability may reach over 1,000 km. The missile can hit both naval and ground targets, he added.

The carriers of Tsirkon missiles will be naval ships and submarines equipped with Kalibr missile systems. According to experts, it is impossible to intercept this missile with the existing missile interceptor means.

The Gremyashchiy is the Project 20385 lead corvette laid down on February 1, 2012 and floated out in June 2017. The corvettes of this Project developed by the Almaz Central Marine Design Bureau are designated to detect and destroy enemy submarines and surface ships, provide for troop landing and cope with numerous green-water tasks.

The corvette Gremyashchiy will become the first warship in the Pacific Fleet to carry Kalibr cruise missiles. The warship is expected to enter service with the Pacific Fleet by the end of 2019. Project 20385 envisages a hangar for a Ka-27 helicopter.