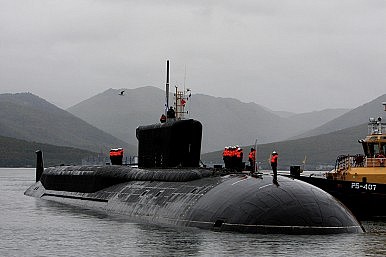 The first modernized Project 955A strategic nuclear submarine, the ‘Knyaz (Prince) Vladimir,’  was launched on 17 November at Sevmash Shipyard in northern Russia.
The development and the construction of the series of Project Borei-A strategic missile-carrying underwater cruisers and the eventual development of Project Borei-B submarines with the subsequent construction of fifth-generation nuclear-powered subs are “aimed at fulfilling the task of maintaining the armament and equipment of the groupings of strategic submarines in the Pacific and Northern Fleets at a high level,” Russian Navy chief, Admiral Vladimir Korolyov, said.
Three project 955 Borei-class SSBNs are currently in service. The first of the Borey-A variants, Knyaz Vladimir, was laid down in July 2012 in a ceremony attended by Russian President Vladimir Putin.