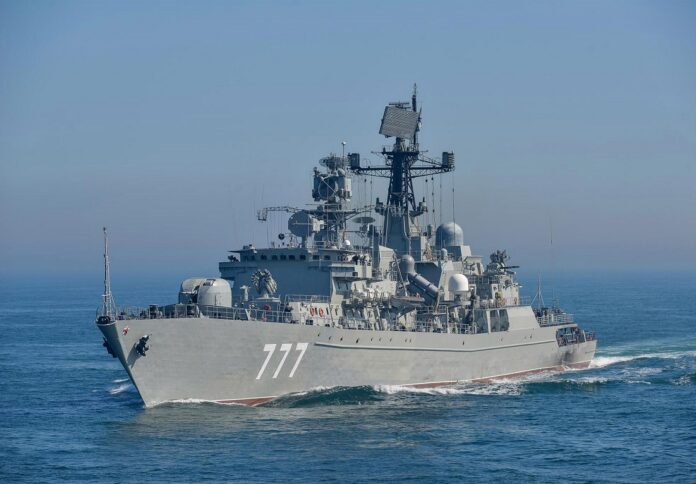 The Russian Baltic Fleet’s guard ship Yaroslav Mudry, the tanker Yelnya and the sea tug Viktor Konetsky accomplishing their long-distance deployment missions in the Indian Ocean will hold the first ever drills with ships of the Japanese Navy by end of January, Fleet Commander stated on Monday (13rd Jan).

“The upcoming Russian-Japanese drills that will run in the Gulf of Aden will be the first maneuvers involving the ships of the Baltic Fleet and the Japanese Navy in Russia’s modern history. For us, this will be new interaction and experience for the ships’ commanders,” the admiral said.

During the drills, the sides will practice their interaction in the piracy-dangerous area of the Gulf of Aden, he added.

The ships of the Baltic Fleet and the JMSDF will practice joint maneuvering, fighting terrorists, carrying out rescue operations at sea and other tasks during their joint drills.

The Baltic Fleet’s guard ship Yaroslav Mudry, the tanker Yelnya and the sea tug Viktor Konetsky embarked on their long-distance deployment from the Baltic Fleet’s main naval base of Baltiysk in the westernmost Kaliningrad Region on October 1, heading for the Indian Ocean.

During their long-distance deployment, the warships took part for the first time in the naval component of the Indra-2019 Russian-Indian drills that ran in the Arabian Sea on December 16-19 and also in the Russian-Iranian-Chinese maneuvers.

Currently, the Baltic Fleet’s naval group is on an anti-piracy mission in the Indian Ocean, leading civilian vessels through the Gulf of Aden.

Check out the Naval Library mobile app to find out more about warships.