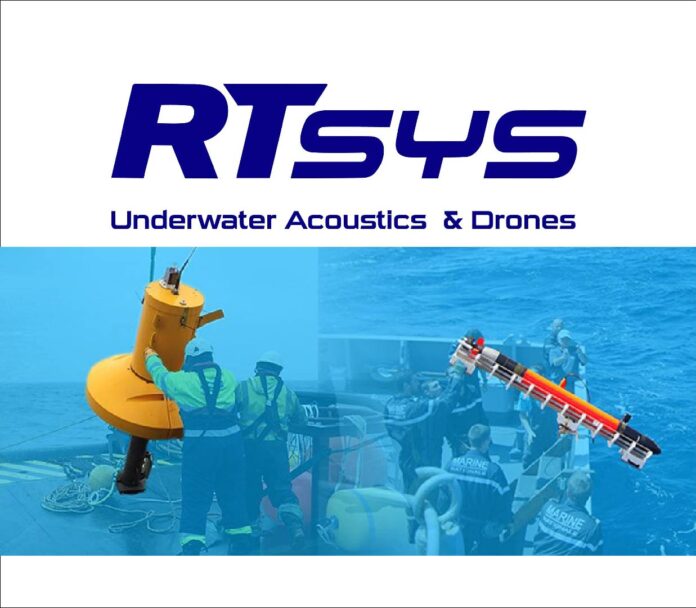 Founded in 2010, RTsys is a French Company based in Caudan (France) specialized in passive and active underwater acoustics and AUVs. The company is part of the “Neotek” group, which has more than 30 years of experience in providing equipment for both the Marine and Naval industry. Focusing on technology, RTsys employs forty (40) people, including thirty (30) high-level engineers. Located close to the sea in Brittany, RTsys possesses a sea test base and two boats enabling a total independence for in-situ and customers’ acceptance tests RTsys also has its own pressure test bench and calibration bench for FATs and certifications.

RTsys is specialized in passive and active underwater acoustics and AUVs. The full range of equipment is used not only in the Defense sector (MCM and ASW) but also among the marine scientific community (KIOST, SHOM, DSO…). Every solution is equipped with an electronic board reference SDA® (Synchronous Data Acquisition), a technology developed by RTsys R&D team that allowing the total control on the hardware and software features. It is important to note that all RTsys products are under their own IP and RTsys doesn’t rely on any supplier for IP of products.

RTsys was founded in 2010 by Raphaël Bourdon and Laurent Dufréchou. They started their careers as hardware and embedded software engineers in fields such as science, automotive and marine technology. They designed a high-performance electronic board that will be the core of all of the products of the company: the SDA14. Focused on the passive acoustic monitoring, the first product of the company was the EA-SDA14 acoustic recorder, able to record over up to 4 acoustic channels.

In 2012, after successful collaborations, RTsys joined Neotek Group in 2012, specializing itself in underwater acoustics and robotics.

RTSYS manufactures marine systems, industrial production of small quantities up to a thousand (1000) units per year. Its Engineering and R&D team is composed of engineers skilled in signal processing, analog and digital electronics design, embedded software and mechatronics. RTSYS production capability relies on experienced subcontractors able to deal with several thousands of units per month.

Driven by innovation, RTsys invests a huge amount of own funds per year in R&D. While the acoustic monitoring devices remains an important activity and the foundation of the company, several years of R&D led to high technology products such as AUVs and Sonars system for the Defense sector Those high added value products open the door to new opportunities and markets. Today, RTsys products are field proven equipment by Navies worldwide on both Mine Counter Measures (MCM) and Anti-Submarine Warfare (ASW).

The recognized expertise in the Defense sector and close collaboration with the French Navy enable RTsys to develop innovative underwater detection tools and AUVs for use in Anti-Submarine Warfare and Mine Counter Measures.

RTsys is in constant growing and now relies on different strong business units. Engaged in several important and long-term contracts, RTsys is in an optimal financial situation.

2012: First contract with the French Navy for developing and manufacturing the SEMA AUV ASW TRAINING TRAGET now being used as a NATO standard in ASW training

2015: Contract with the French Navy to design and manufacture SonaDive : sonar and real time tracking system for divers under MCM operation

2018: Opening of the Singapore Office (now moved to Indonesia)

RTSYS is a world leader in the design and manufacture of acoustic systems tests and training, torpedo firing exercises and acoustic signature measurements.

SEMA is an autonomous, recoverable, acoustic target dedicated to ASW training. It is operable for all kinds of platforms such as surface ships, submarines, helicopters and ASW aircraft. Easy to deploy from both a RHIB or a boat, the navigation route is plotted with either waypoints or segments. Different types of training modes such as passive, active and combined acoustics can be programmed. SEMA is easy to operate and recover and is reconfigurable in one hour with a spare battery.

SIERA is an autonomous system towed at variable immersion from a dedicated boat. SIERA is composed of 4
subsets:
A processing and visualizing unit
A generation and acquisition unit;
A light towed body;

RTSYS provides EOD Divers and Special Forces with a complete range of AUVs and diver-held navigation and sonar
systems to upgrade divers’ efficiency and safety during MCM Operations.

SonaDive is especially designed to assist military and professional divers in navigation and underwater object detection. Two types of forward multibeam imaging sonar helps divers in the search and identification phase, from 0 to 300m with the most ultra- high-resolution display.

The embedded navigation system relies on several sensors: INS, DVL, pressure sensor, and a deployable floating GPS. The contribution of native acoustic communication offers the most improved navigation thanks to the Sparse-LBL technology and allows a constant accuracy during the mission.

Divers can communicate all together and with the surface unit in real-time via the acoustic modem, sharing contacts and text messages within more than 2 km range, reaching up to 5 km using RTSYS relay beacons.

Sonar and navigation data are fully recorded allowing mission replay, data analysis and export. With 6 hours of
battery life, the endurance can be extended by swapping batteries underwater during mission.

NemoSens is a compact autonomous underwater vehicle (AUV) designed for scientific, industrial and defense applications.
Lightweight and affordable, its open LINUX architecture allows users to develop their own navigation algorithm for greater flexibility and maximal use.

Mission coverage can be extended thanks to swarm technology and possibility to deploy multiples AUVs. NemoSens is also compatible with all RTSYS products range such as SonaDive diver held systems and beacons.

NemoSens integrates the latest upgrades of both hardware and software developments from RTSYS range of products. It is therefore the most valuable and most performing micro AUV of its generation.

Software functions and measurement sensors (within a 2- kg limit) can be added on demand, making of NemoSens the most versatile and flexible µAUV of the market

COMET-MCM is a two men portable AUV, requiring no specific installation. Its operation (launching and recovery) can be carried out even from a light RHIB. As COMET-MCM is equipped with a battery pack allowing 20 hours, it can either cover a large zone in a single mission or be suitable to serial runs of shorter missions of detection with limited replenishment time.

COMET-MCM is equipped with a Klein UUV- 3500 side scan sonar operating at 455/900 kHz and a low- light HD camera. Both systems provide data, which can be geolocalized by post- processing, based on COMET-MCM navigation data.

COMET-MCM embeds a GPS, INS, DVL, OAS and a native modem. The COMET LBL protocol provides very accurate relative positions (less than 5m constant, i.e. independent from the distance covered) based on data redundancy depending directly on the available network (number of systems on the surface and underwater).

Depending on the mission, the user shall adapt the network to his area and the positioning requirement.

Recorded data are accessible by WIFI or Ethernet connection once COMET-MCM has surfaced. Mission programming is realized thanks to a proprietary RTSYS HMI compatible with the whole range. This HMI can be installed on a PC or a waterproof tablet. It also allows the update and recovery of navigation elements. It finally can be used to retrieve data from on- board sensors and payloads such as the SSS and the video camera.

Check out Naval Library App to find out the specifications of the RTSYS Products.