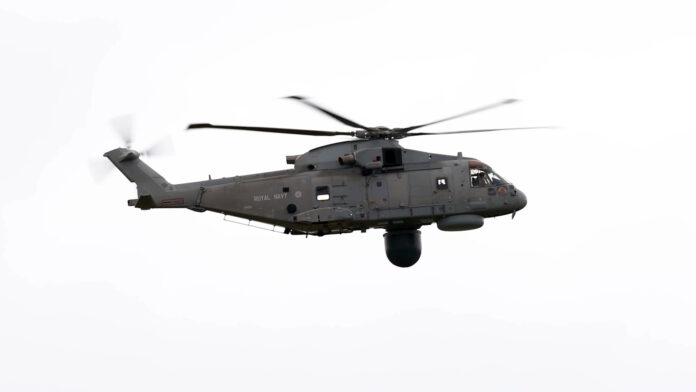 The first of the Royal Navy’s new AEW Helicopter has entered service – getting ready to protect the nation’s flagship.

The first Merlin ‘Crowsnest’ helicopter – which scours the heavens with its radar looking for potential foes – will now begin operational training, ahead of the maiden deployment of HMS Queen Elizabeth this spring.

The distinctive-looking helicopter – a large radar dome or ‘bag’ sticks out from the fuselage, earning the aircraft the affectionate nickname of ‘baggers’ – will provide airborne surveillance and the control of other aircraft (known as ASaC) in the carrier’s strike group.

Training by aircrews to use the new system, which allows crews to conduct air and missile defence as well as strike command and control, has been underway since the autumn.

Captain Stuart Finn, the Commanding Officer of RNAS Culdrose said: “The delivery of this first aircraft at Culdrose represents an enormous amount of hard work, dedication and passion across the defence and industry enterprise. It marks a significant moment for the Royal Navy as we become a carrier task group navy capable of deploying around the world as a sovereign group or with our allies.

“It is especially poignant that these aircraft are based here at Culdrose, the home of ‘the eyes of the fleet’, and we are proud of our association with airborne surveillance and control and before that, airborne early warning.

“These aircraft will work side by side with the rest of the Merlin Mk2 force to provide a world-class line of defence for our global navy, adding above water expertise to our already renowned submarine-hunting skills.”

The Merlins have been kitted out with new mission systems and radars from Thales Group by aerospace company Leonardo in Yeovil, overseen by Lockheed Martin.

Each helicopter has a crew of three: two observers (mission and tactical specialists) and one pilot. High above the fleet with their sophisticated sensors, they enable the carrier strike group commander to see, understand and react well beyond the horizon for any air or surface threats. They can also act as a control centre for strike operations between the carrier and the ship’s F-35 Lightning jets.

Commodore Steve Moorhouse, Commander UK Carrier Strike Group, who will direct HMS Queen Elizabeth’s first deployment with the help of his staff, said the new Merlins were the final pieces in the group’s large, complex jigsaw.

“It’s hugely encouraging to see the progress of the Crowsnest trials. Already one the most advanced submarine hunters, the Merlin Crowsnest will offer long-range intelligence and surveillance against surface and airborne threats, and the ability to command and control strike missions,” he said.

“Coupled with the Wildcat attack helicopter, the UK Carrier Strike Group will soon operate one of the most capable and versatile helicopter air groups.”

Commander Ian Varley, the Commanding Officer of 820 Naval Air Squadron, which is dedicated to protecting the carriers, their escorts and support ships, said his air and ground crew had been working tirelessly to prepare for the carrier mission; almost his entire squadron will be deploying with HMS Queen Elizabeth.

“The addition of the ASaC helicopters alongside our anti-submarine aircraft is a huge boost in our capabilities,” he added.

“I know the men and women on the squadron are looking forward to working alongside the rest of the fleet to continue the Royal Navy’s long tradition of air power at and from the sea.”

AEW helicopters can detect and track other aircraft and incoming threats (missiles etc.) at extreme ranges and helps to control their own organic aircraft. This greatly increases the effectiveness of its combat aircraft, because they can see much further. Incoming raids or missiles can be detected much further away and the carrier’s air wing can be called to action.

HMS Queen Elizabeth is due to deploy to the Mediterranean, Indian Ocean and into the Indo-Pacific region in an operational deployment with the UK’s allies and partners.

Check out Naval Library App to find out the specifications of the Merlin Helicopters :