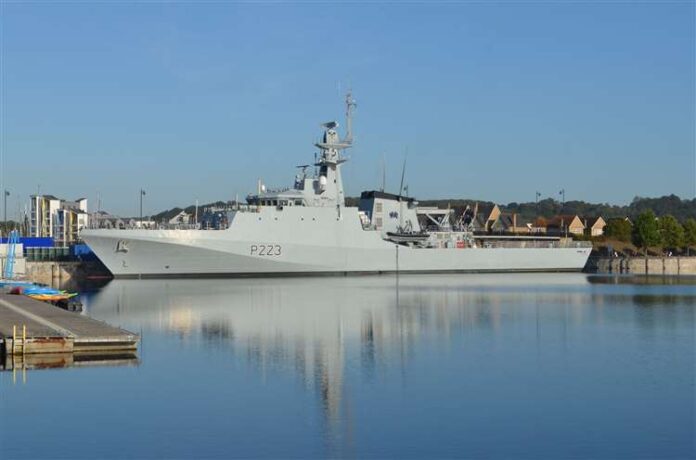 The Royal Navy’s latest Offshore Patrol Vessel (OPV), HMS Medway (P-223) has been commissioned with a ceremony in Chatham. The ceremony is part of a weekend of events celebrating the ship’s link to the town. The offshore patrol vessel was brought into service in the Towns – named after the river she takes her name from.

During the ceremony, Commander Ben Power, the ship’s commanding officer, said: “It is special to be commissioning this ship here on the River Medway, an area that has an incredibly strong connection with the Royal Navy going back to the 16th Century.

“We have a part to play in the very bright future of the Royal Navy. Medway is a very fine ship, she’s slick, fast and agile.”

Medway is the second of five Batch 2 River Class vessels ordered for the Royal Navy, she arrived in Portsmouth on the 17th of June 2019.

The Royal Navy say that these ships are designed to carry out maritime security roles in Home waters or globally including; anti-smuggling, fishery protection, border patrols, counter-terrorism and counter-piracy.

HMS Medway is alongside in her home port for a couple of weeks before sailing for further workup and trials. After the summer leave period, she will then undergo FOST (Flag Officer Sea Training) serials and inspections. FOST staff based in Faslane will focus on seamanship and safety before she goes to Devonport where the emphasis is more on operations, aviation and replenishment at sea. After commissioning into the fleet at a ceremony in Chatham in the Autumn, she is likely to spend some time in UK waters and may conduct fishery protection patrols before being forward-deployed overseas for an extended period.