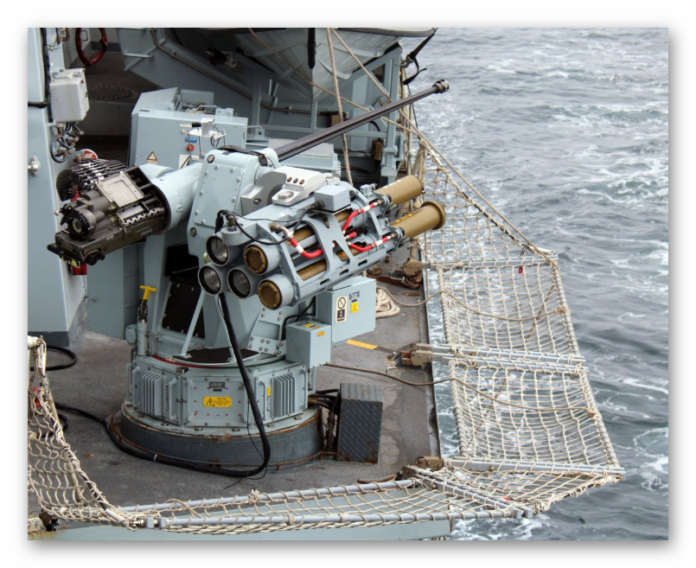 Amid an increasing threat from small boats used by terroists and suicide bombers, the Royal Navy has successfully tested the brand new Martlet missile. The Lightweight Multirole Missile (to be known as Martlet) was intended to be launched from Wildcat helicopters against small boats and drones. However, recent incidents involving shipping being targeted by small drones and unmanned systems lead to the Royal Navy deciding to integrate the missile with surface ships as well. The Royal Navy modified the system so a launcher could be fitted to the existing 30mm automatic gun.

To test new integration of system, HMS Sutherland fired four missiles at a fast moving speedboat off the Welsh coast.

“The current defence against fast inshore attack craft, the 30mm gun, is highly effective for closer range engagements,” said Lieutenant Commander George Blakeman, HMS Sutherland’s Weapon Engineer Officer. “By adding the missile to the gun mount it is anticipated it will extend the reach of the ship’s defensive systems – key to a successful defence against fast craft using swarm attack tactics.” Although the decision might have been made sooner, it is encouraging to see new a new weapon being quicky tested and brought into service proof the RN is trying to become more agile in its procurement process. Recent events in the Arabian Gulf have demonstrated this is a very sensible investment for the RN and let us hope it can be rolled out across the fleet as fast as quickly possible. The MoD ordered 1,000 LMMs back in 2011 for use with Wildcat and it may see widespread use. There is a perception that RN vessels are under-armed and this is a welcome addition to firepower against asymmetric threats.

The Lightweight Multirole missile is approx 1.3m long, weighs 13kg, has a 3kg warhead, speed of Mach 1.5 and a range of 5 miles.

For further information here is the brochure of the missile : https://www.thalesgroup.com/sites/default/files/database/document/2019-02/LMM_Brochure_05_17_SM.pdf