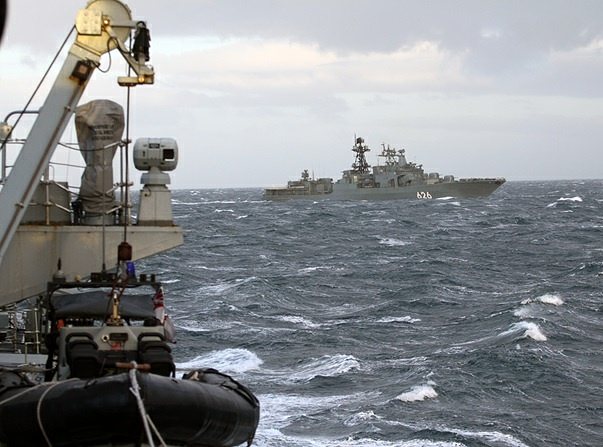 Royal Navy frigate HMS Somerset shadowed a Russian naval destroyer through the Moray Firth this weekend.
Somerset, a Plymouth-based Type 23 frigate, detected and monitored the movements of the Russian warship Vice Admiral Kulakov and her supporting tanker.
HMS Somerset had been engaged in trials of her cutting-edge sonar equipment when she received the call to locate and shadow the Russian units.
She arrived in the Moray Firth on Saturday (18 November) and escorted the ships through UK waters and north along the coast of Norway before returning to her original task.
The Vice Admiral Kulakov is a Russian Udaloy-class destroyer. It is thought she was returning from a deployment in the Mediterranean. The warship was accompanied by a tanker, which is standard procedure for Russian ships.
It was not the Kulakov’s first visit to UK waters as the destroyer was also shadowed by HMS Somerset from the same position in the Moray Firth in March 2016.
Russian warships of the northern and Baltic fleets routinely pass through UK territorial waters en route to or from deployments in the Mediterranean and Gulf regions.