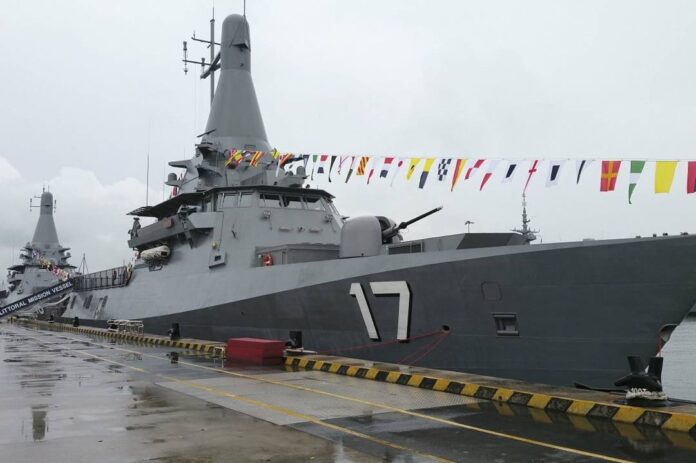 Six months after Singapore’s first littoral mission vessel (LMV) became fully operational, the Republic of Singapore Navy (RSN) has added two more of the locally-built, high-tech warships to its fleet.
RSS Unity and RSS Sovereignty turned fully operational in a commissioning ceremony officiated by Defence Minister Ng Eng Hen at Changi Naval Base on Tuesday (Nov 14), following the commissioning of RSS Independence in May.
The new LMVs have been undergoing trials at sea since they were launched in 2016.
These warships are meant to replace 11 Fearless-class patrol vessels, which have been in service for more than 20 years. Eight of these LMVs are expected to be fully operational by 2020.
The 80m-long Independence-class LMVs are jointly developed by the RSN and the Defence Science and Technology Agency (DSTA), and equipped with technology such as advanced radars and sensors, and a 360-degree out-of-window view.
The LMV measures 80 m in length, 12 m in breadth, and has a hull draught of 3 m. The platform is powered by two MTU 20V 4000 M93 engines in a combined diesel and diesel (CODAD) configuration, and has a top speed in excess of 27 kt and a standard range of 3,500 n miles at 15 kt.
The 1,250-tonne warship platform has a baseline crew complement of 23 including five officers, and has a mission endurance of 14 days. The LMV is armed with one Oto Melara 76/62 Super Rapid naval gun, two Oto Melara Hitrole 12.7 mm remote-controlled weapon stations, and a Rafael 25 mm Typhoon stabilised naval gun system in the aft section.