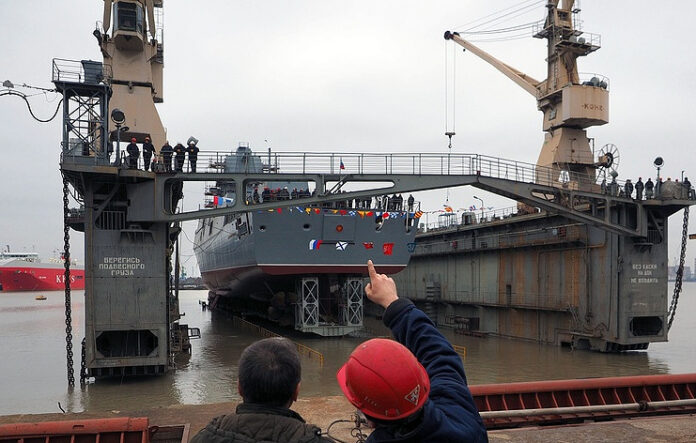 Shipbuilders intend to deliver the second (the first serial-produced) Project 22350 frigate Admiral Kasatonov to the Russian Navy in the autumn of 2019, Head of the United Shipbuilding Corporation Alexei Rakhmanov told Russian TASS on July 4.

“The second warship of this series, the Admiral Kasatonov, was due to have been delivered this year but considering that the ceremony of hoisting the flag aboard the [Admiral] Gorshkov has been postponed, we simply won’t be physically able to prepare the next ship. The delay with the delivery of the lead ship always automatically shifts the delivery of the second ship by about eight months. So, it turns out that we are now planning this for October-November 2019,” he said.

The head of the United Shipbuilding Corporation said he hoped that Russian propulsion units produced by Saturn Company would be mounted on the next warships of this series and “delays due to engine problems will recede into the past.”

Russian Navy Shipbuilding Directorate Head Vladimir Tryapichnikov said earlier that the Navy expected to get the Admiral Kasatonov in 2018. The frigate’s sea trials were planned to begin in the summer of this year.

The frigate Fleet Admiral Kasatonov is the second (the first serial-produced) Project 22350 warship. The Project was developed by the Severnoye Design Bureau. The lead warship of this series, the Admiral Gorshkov, is expected to be delivered to the Navy this year and the construction of two more frigates (the Admiral Golovko and the Admiral Isakov) continues at the slipways of the Severnaya Verf Shipyard in St. Petersburg.

Project 22350 frigates are expected to become the Russian Navy’s most advanced warships in their class. These frigates displace 4,500 tonnes and can develop a speed of 29 knots. They are armed with Oniks and Kalibr missiles and the Poliment-Redut air defense missile system.