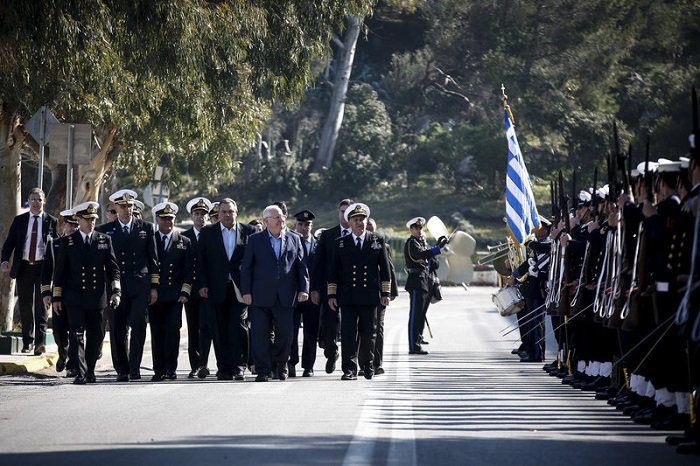 The Greek General Staff announced that on Wednesday, 31 January 2018 , Israeli President Reuven Rivlin visited the Fleet Headquarters at the Salamis Naval Base, in the framework of his official visit to Greece.
During his visit to the Fleet Headquarters, the President of the State of Israel was briefed on the activities of the Greek Navy and on matters of cooperation between the Armed Forces of the two states.
Then he moved to the position of the SALAMIS frigate, where he addressed the ship’s long-standing crew. He also praised the role and quality of the Greek Fleet over time and stressed the importance of Maritime Force in achieving national goals.
During his visit, the President of the State of Israel was accompanied by Israel’s Ambassador to Greece, Ms. Irit Ben Abba, Rear Admiral Eli Sharvit, Israel’s High Commissioner of Israel, and senior Israeli officials.
Note that this is the first President of a foreign state to visit the Greek Navy  Fleet Headquarters