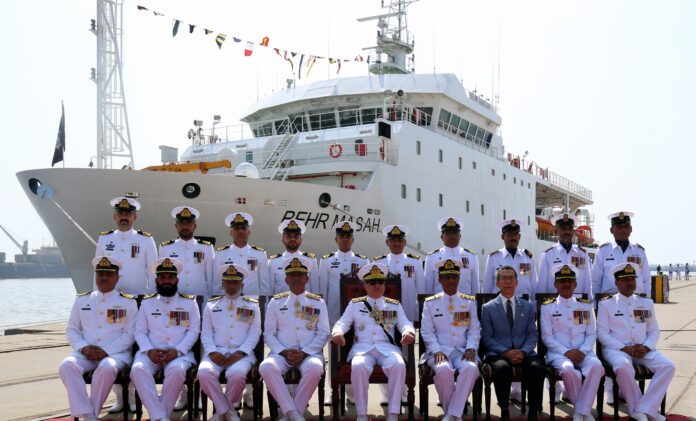 According to the official press release of Pakistani Navy on 4th November, Pakistan Navy commissioned survey ship “Behr Massah” at a ceremony in Karachi on Monday (4th November).

The research ship, BEHR MASAH, which has been built in China for Pakistan Navy, is outfitted with modern equipment and will be used to explore natural resources in the sea.

Speaking at the ceremony, Naval Chief Admiral Zafar Mahmood Abbasi said commissioning of Behr Massah will prove to be a milestone for the Pakistan Navy in the field of modern hydrography.

While speaking about the Sino-Pak partnership, the Naval Chief said that deep-rooted and ever-growing Pak-China friendship is unparalleled and has always lived up to the expectations and this induction is yet another manifestation of it.

Talking about the situation in Indian Occupied Jammu & Kashmir, the Naval Chief said that innocent people are being kept under lockdown and are being subjugated under state oppression.

He said that Pakistan fully stands behind its Kashmiri brethren and shall support them to the last drop of our blood. We stand fully prepared to give a befitting reply to any act of aggression from the adversary.

Pakistan Navy Survey Vessel BEHR MASAH is a 3000 Ton Survey Ship which is over 80 meters in length and is equipped with state of the art equipment and is fully capable to undertake hydrographic, oceanographic and geographical surveys as well as seafloor mapping from shallow to ocean depths. With the induction of BEHR MASAH, the hydrographic survey capabilities of Pakistan Navy would come at par with those of the developed maritime nations of the world.

The Commissioning Ceremony was attended by large number of high ranking officers of Pakistan Navy, government departments and officials from China.