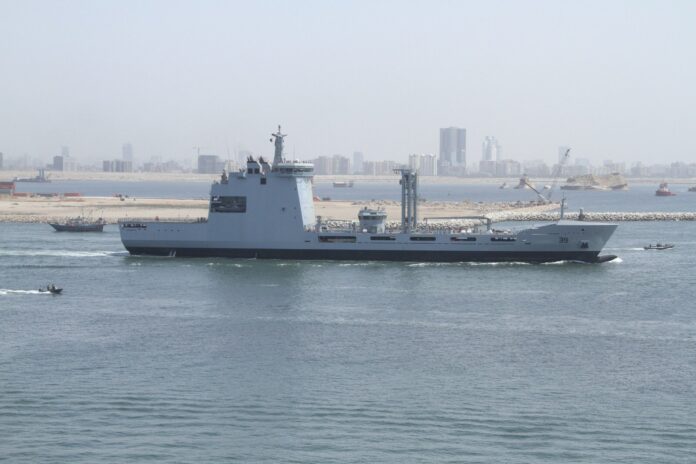 Pakistan Navy on Tuesday (Oct.16) commissioned an indigenously built 17,000-tonne fleet tanker named PNS Moawin to its fleet during a ceremony held at Pakistan Navy Dockyard in Karachi, which was attended by President Dr Arif Alvi, Sindh Chief Minister Murad Ali Shah, Naval Chief Admiral Zafar Mahmood Abbasi and Turkish delegation.
PNS Moawin was commissioned after being launched in August 2016 and starting trials in May this year.
The 158-meter tanker was built by Pakistan’s Karachi Shipyard under a design provided by Turkey’s STM.
According to a statement issued by the Pakistan navy, PNS Moawin is the biggest warship ever constructed at Karachi Shipyard.
The newly inducted ship is “capable of performing a variety of maritime operations including the provision of logistic support to other ships at sea by transferring fuel and other important military cargo”, read the statement.
The commissioning of PNS Moawin is the latest highlight of the bilateral defense cooperation which will see Pakistan acquire Milgem corvettes from Turkey and have its submarines modernized by Turkish STM.