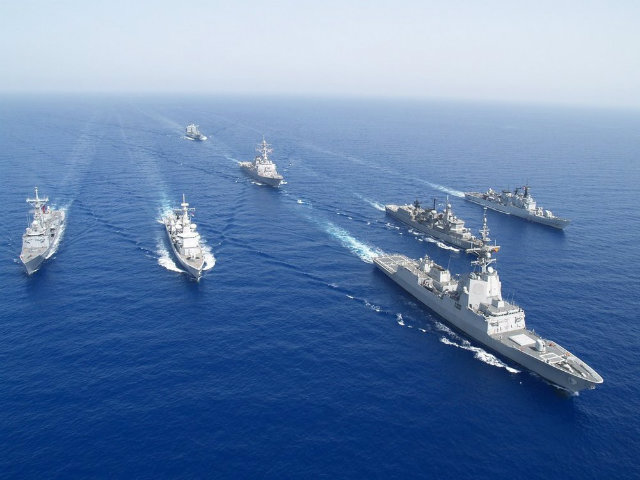 A ceremony to greet Russia’s Northern Fleet task force led by the Admiral Gorshkov frigate returning from a successful circumnavigation of the globe was held on Tuesdsay in Kronstadt, a town and a naval base near Russia’s second largest city of St. Petersburg.

“A welcome ceremony, led directly by Navy Commander Adm. Nikolai Yevmenov, was held to greet a Northern Fleet task force led by the newest frigate, Admiral of the Fleet of the Soviet Union Gorshkov, which returned from the global circumnavigation voyage to participate in the Main Naval Parade of Russia to take place in St. Petersburg and Kronstadt on July 28,” the Russian Navy’s press service said in a statement.

“The crews… fulfilled their objectives with flying colors, performing the first global circumnavigation in the newest history [of Russia]. In fact, now one can say for sure that the Russian Navy resumed circumnavigation journeys of warships, suspended in early 1990s,” the press service quoted Yevmenov as saying.

The detachment of Northern Fleet’s ships and support vessels began its long-distance voyage on February 26. Over this period of time the Northern Fleet sailors have covered over 35,000 nautical miles calling at ports in Djibouti, Sri Lanka, China, Ecuador, Cuba and Trinidad and Tobago. They have sailed through the Suez and Panama Canals and have crossed the Equator in the eastern part of the Pacific Ocean. During the journey, the crews carried out a number of exercises.