New corvette Wuhai joins PLA Navy.
The commissioning ceremony of the new corvette Wuhai of the PLA Navy was held at a naval port in Dalian, north China’s Liaoning province on Monday (Jan 15).
Rear Admiral Lv Baoqiang, political commissar of a naval base under the PLA Northern Theater Command, conferred the ensigns of the PLA and the PLA Navy and the naming certificate on the corvette Wuhai at the ceremony. A grand flag-raising ceremony was later held on the corvette.
The Type 056 corvette Wuhai, with good stealth performance and powerful surface attack and air defense capability, will undertake multiple mission such as costal patrol, fishing boats escort, attacking surface warships and submarine of the “enemy” independently or in joint operations.
The Type 056 corvette is the first Chinese modular warship that can be deployed as an offshore patrol vessel or a multi-role frigate. The vessel features stealthy hull design integrating sloped surface and compact superstructure.
The guided missile corvette has a length of 89m, beam of 11.6m and maximum draft of 4.4m. The full load displacement of the warship is 1,365t and crew capacity is 60. 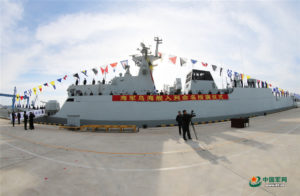