navalpost
Home Exercises French-led multinational exercise La Perouse to be conducted in the Bay of... 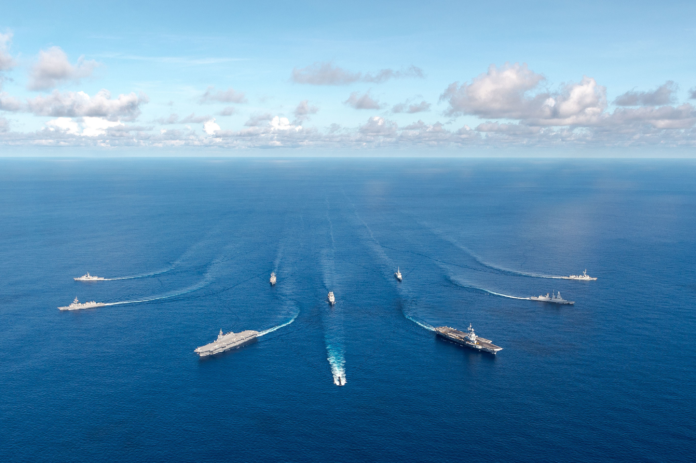 French-led multinational Naval exercise La Perouse is scheduled from 05th to 07th April 2021 in the Bay of Bengal with QUAD forces’ participation (Indian, Australian, Japanese, and the U.S. Navies) and the French assets. The participating navies had taken part in the previous iteration of the exercise held in 2019, while India will make its debut by sending two surface assets (INS Satpura and INS Kiltan) this year.

“This exercise will see an Australian frigate and auxiliary oiler conduct a range of activities, including officer-of-the-watch manoeuvres, replenishments at sea, and flying operations. Exercise La Perouse will also demonstrate the complementary capability of our partner nations and highlight our shared commitment to a stable and secure Indo-Pacific.” Australian Minister for Defence said.

“The exercise La Perouse, led by French Navy, has participation by FN Ships Tonnerre, an amphibious assault ship and frigate Surcouf. United States Navy is represented in the exercise by amphibious transport dock ship Somerset. Her Majesty’s Australian Ships (HMAS) Anzac, a frigate, and tanker Sirius have been deployed by RAN for participation in the exercise. Simultaneously, Japan Maritime Self Defence Ship (JMSDF) is represented by the destroyer Akebono. In addition to the ships, integral helicopters embarked onboard ships will also participate in the exercise,” Defence Ministry of India outlined with a press release.

The La Perouse exercise took its name after the 18th-century naval officer whose squadron disappeared on an exploratory expedition in the Pacific, focused on interoperability, communications, formation steaming, live-fire weapons shoots, and search rescue drills.

This series of naval exercises allows France to maintain its military cooperation with its main strategic partners in the region.

The exercise’s primary purpose is to demonstrate our partner nations’ complementary capability and highlight the participants’ shared commitment to a stable and secure Indo-Pacific.