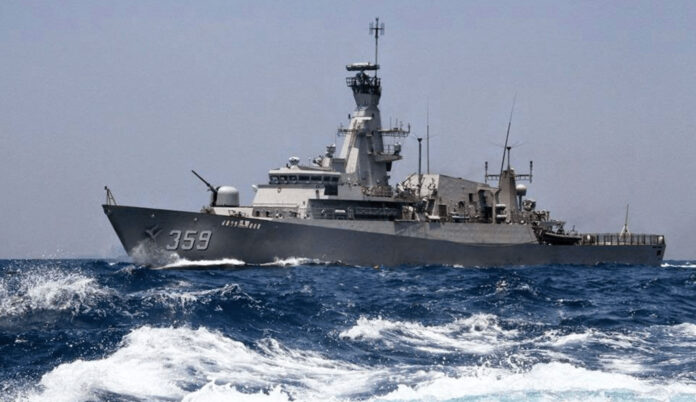 On 10 March in Jakarta, Len Industri and Thales signed a contract for the complete modernisation of the KRI Usman-Harun multi-role light frigate’s mission system, witnessed by King Willem Alexander of the Netherlands and Minister of Trade Agus Suparmanto.

Thales has been a leading partner of the Indonesian Navy for the last forty years, as the appointed supplier of combat systems for all warships in service. In addition, Thales has a long-standing relationship with Len Industri, who is the systems integrator for the KRI Usman-Harun’s Mid Life Modernisation (MLM) programme.

The KRI Usman-Harun frigate has more than 15 years of service under its belt. Building on the long collaboration Thales has with the Indonesian Navy, the contract will see Len Industri and Thales install the TACTICOS Combat Management System, the SMART-S Mk2 air and surface surveillance radar, the STIR EO Mk2 radar and EO fire control system and the Vigile Mk2 tactical multi-purpose R-ESM system. These systems are currently also installed on the Indonesian Navy’s new Raden Eddy Martadinata class frigates, enabling consistency in operations for the Navy, and ensuring that their fleet remains one of most advanced in the region.

Modernisation programmes are a cost-effective means of extending the lifecycle of any naval fleet and upgrading the critical mission systems ensures that the latest developments in combat management and sensors are installed for optimum performance. This upgrade for the KRI Usman-Harun is expected to be completed by the end of 2023, and it will considerably extend the life of the frigate.

Thales has supplied and integrated the naval combat electronics for four Sigma class corvettes and is also the supplier and integrator of the naval mission systems for the current Indonesian Raden Eddy Martadinata Frigate programme.

Aligned with Indonesia’s vision of building indigenous capabilities in the defence sector, Thales has worked closely with Len Industri over the last decade, including signing Memorandums of Understanding and naval combat management systems, through research and transfer of technology. The modernisation of the KRI Usman-Harun is Len Industri’s first major mission modernisation and its first mission systems integration programme.

“This contract underlines the excellent relations between the Republic of Indonesia, Len Industri and Thales. The program will strongly contribute to the independence of the Indonesian defence industry and lays a strong foundation for future naval contracts, both for new builds as well as modernisations.” Erik-Jan Raatgerink, Country Director, Thales in Indonesia.