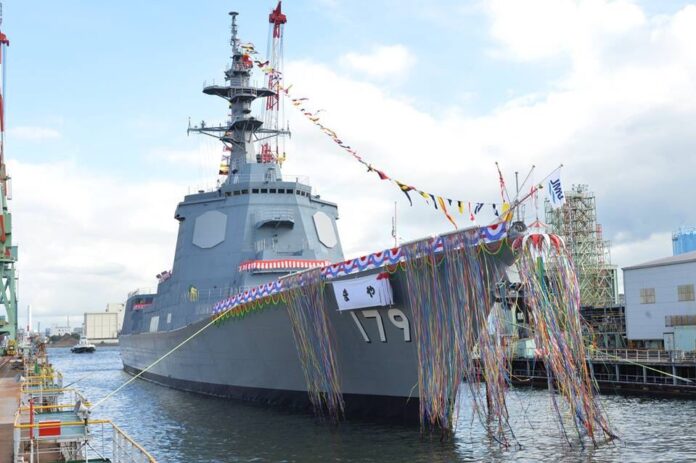 Japan launches first 27DDG-class AEGIS destroyer from a shipyard in Yokohama today (July 31). She has named “Maya” after mountain in Japan and WWII heavy cruiser.
The US$1.5 billion vessel is the seventh Aegis destroyer acquired by Japan Maritime Self-Defense Force, but the first to be fitted with the advanced Cooperative Engagement Capability (CEC) system. With a displacement of 8,200 tons and a length of 170 meters, it is scheduled to enter service by 2020.
Supplied by the US, the CEC system enables real-time sharing of intelligence on battlefield situations and hostile targets between ships in allied navies, while information and parameters are synced across all platforms linked to a sensory network. Sharing of radar and fire-controlling data will also be possible with the US Navy.
Warships equipped with this system can intercept incoming ballistic missiles in steep, lofted trajectories, and track dozens of targets simultaneously while firing clusters of defensive missiles, according to Japan Times. One such missile is the SM-3 Block IIA.
Japan will have eight Aegis destroyers with a ballistic missile defense capability by 2021. At their core will be a computer-based command-and-decision element capable of mounting simultaneous operations against a range of of threats.