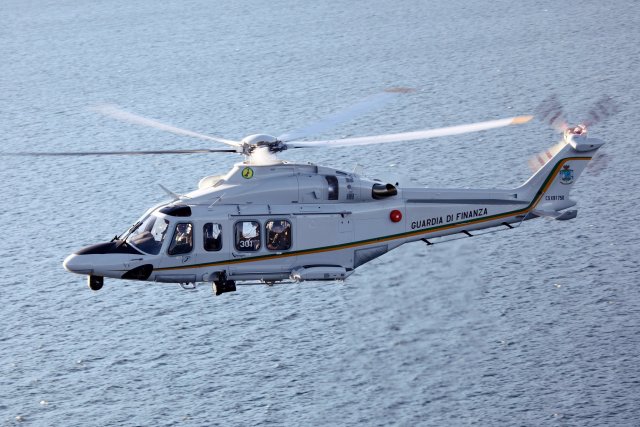 Leonardo announced today further orders for its AW139 intermediate twin engine helicopter for public service and security operations in Italy, with contracts for eight aircraft valued at approximately 112 million euro, the Italian defense company said on December 11, 2017.
The Italian Coast Guard has signed a contract for two AW139s to perform search and rescue missions, with deliveries to be completed by the end of 2018, while the Italian Customs and Border Protection Service (Guardia di Finanza) has ordered six to perform patrol operations, with deliveries to be completed by 2020.
With these aircraft deliveries both operators will have a fleet of 14 AW139s each, allowing a further enhancement in mission capability and simplified logistics as they replace ageing AB412 aircraft. The Italian Coast Guard recently passed the 10,000 flight hours milestone with its AW139 fleet, having saved many lives in operation and providing evidence of the outstanding effectiveness, reliability of the aircraft and successful partnership with Leonardo. Italian Customs and Border Protection Service has been using its AW139s for a range of roles across the nation including mountain and maritime patrol and reconnaissance, law enforcement, SAR and homeland security.
To date, 53 AW139s have been ordered by the Italian Government operators for public services.