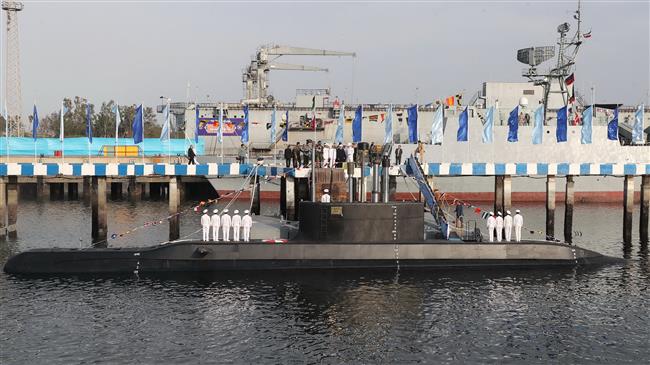 Iranian President Hassan Rouhani has inaugurated a new domestically-built submarine armed with cruise missiles in line with the Islamic Republic’s move to boost its defense power.

The inaugural ceremony for Fateh (Conqueror) submarine was held in the southern port city of Bandar Abbas in Hormozgan Province on Sunday (Feb 17).

Fateh, with a 100-percent domestically-sourced technology, can operate more than 200 meters below the sea surface for nearly five weeks.

Iran’s first semi-heavy submarine is capable of carrying and firing cruise missiles that could be launched from a submerged position.

The 527-tonne submarine is also equipped with state-of-the-art weaponry, including torpedoes and naval mines.

Fateh is also outfitted with a guided-missile system and an advanced sonic radar system, which can identify enemy vessels.

Speaking to reporters following the inauguration ceremony, Iran’s Defense Minister Brigadier General Amir Hatami noted that Fateh submarine is a totally indigenous product whose entire design process has been done by Iranian scientists and experts at the Marine Industries Organization of Iran, which is affiliated with the Defense Ministry.

He added that the new Iranian submarine is equipped with a variety of top-notch technologies, including sonar systems, electric propulsion, a system for firing submarine-launched missile at surface targets, an electronic warfare system as well as a secure integrated communications system.

Iran’s defense minister noted that Fateh submarine can fire torpedoes with a diameter of 533 millimeters and can carry eight naval mines and two reserve torpedoes.

Acceding to Hatami, the new Iranian submarine is made up of more than 412,000 pieces and is the product of 4.202 million person-hours of labor by Iranian specialists.