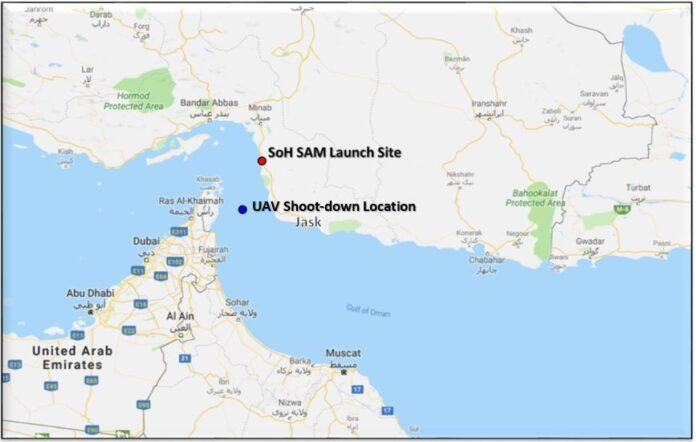 Iran said it had shot down a U.S. surveillance drone that violated its airspace near the strategic Strait of Hormuz, with the U.S. military saying the RQ-4 Global Hawk was more than 20 miles from the Iranian coast.

U.S. Central Command spokesperson Captain Bill Urban said, “U.S. Central Command can confirm that a U.S. Navy Broad Area Maritime Surveillance (or BAMS-D) ISR aircraft was shot down by an Iranian surface-to-air missile system while operating in international airspace over the Strait of Hormuz at approximately 11:35 p.m. GMT on June 19, 2019.”

“Iranian reports that the aircraft was over Iran are false,” he said, adding, “This was an unprovoked attack on a U.S. surveillance asset in international airspace.”

IRGC Commander Major General Hossein Salami said Thursday that “any enemy who trespasses our countries’ borders will not have safety and will be destroyed.”

With an operational range of 12,300 nautical miles, the Global Hawk can fly at high altitudes for over 30 hours and is capable of near-real-time high-resolution surveillance in all types of weather.

U.S. Lieutenant General Joseph Guastella, Commander of U.S. Air Forces Central Command said in a later statement that the Global Hawk was on a surveillance mission “in the vicinity of recent IRGC maritime attacks when it was shot down by an IRGC surface to air missile fired from a location in the vicinity of Goruk, Iran.”

“At the time of the intercept, the RQ-4 was operating at high-altitude approximately 34 kilometers from the nearest point of land on the Iranian coast,” Guastella said.