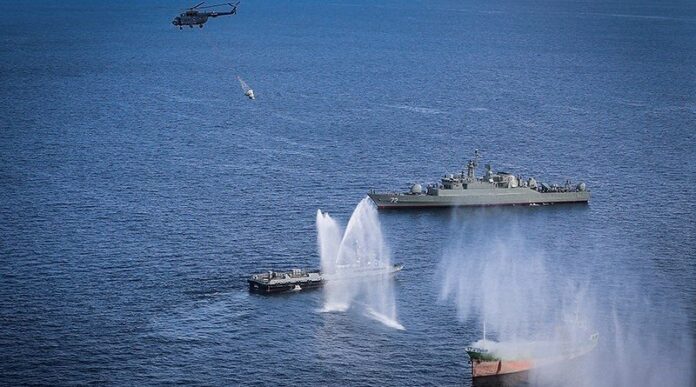 “All different stages of tactical drills, planned for the first time by the navies of Iran, Russia and China, have been successfully completed,” Khazandi said.

He added that “the joint drills of large Asian powers is not a separate event, but it defines a clear path for the region and the whole world in the framework of mutual cooperation.”

He noted that “the epoch of the US, whose actions are aimed at sowing discord [in the region] is over, and Washington should leave the region as soon as possible.”

Khazandi said that “there is no need for foreign powers to be presdent in the region, and Iran is ready to cooperate on this matter with neighboring countries.”

The joint military drills between Russia, Iran and China codenamed “Marine Security Belt” kicked off in the Gulf of Oman and Indian Ocean on Friday. The drills will last until Monday.

Deputy Commander of the Iranian Navy Habibollah Sayyari said earlier that Iran, Russia and China “will find a way to hold joint drills in the future.”.