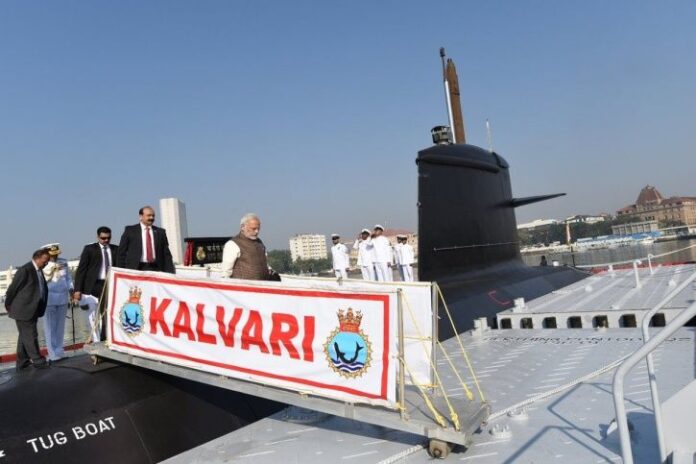 INS Kalvari has been commisioned to the Indian Navy as a first non-nuclear submarine after seventeen years.

Indian Prime Minister Narendra Modi has commissioned the first of the six Scorpène-class submarines into the Indian Navy.

The INS Kalvari has been manufactured in Mumbai by Mazagon Dockyard Limited (MDL), building upon the design of DCNS – a French naval defence and energy company.

As for its technicalities, the INS Kalvari weighs 1,565 tonnes and is capable of reaching speeds of up to 20 knots (37 km/h) while submerged under water. The 221 feet long submarine boasts of a range of 6,500 nautical miles on the surface and 550 nautical miles when submerged. The two 1250 kW MAN Diesel Engines of the submarine run to charge its batteries rapidly. 360 battery cells, weighing 750 kg each, are used to power the Permanently Magnetised Propulsion Motor of the submarine.

After a gap of more than 17 years, INS Kalvari is the first conventional (non-nuclear) submarine to be inducted into the Indian Navy. With the Indian Navy’s submarine division celebrating its golden jubilee this year, the INS Kalvari is a technological marvel on many fronts and will certainly pave the way for India’s defence prowess even under water.