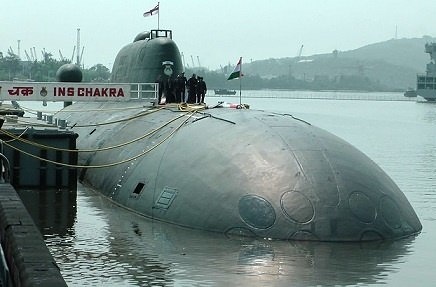 Indian Navy admitted on Friday (Dec 1) that nuclear submarine INS Chakra suffered damages a few weeks back but dispelled the rumour that some US officials were given access to the warship. Navy Chief Admiral Sunil Lanba said that INS Chakra’s SONAR dome was damaged and an inquiry has already been initiated.

INS Chakra was at Visakhapatnam when its SONAR, suffered damages. The SONAR dome could have been damaged either at sea when INS Chakra might have hit something or while docking at Vishakhapatnam.

INS Chakra’s SONAR dome is located in the forward portion of the warship just below the torpedo tubes. Admiral Lanba made the revelation at his annual press conference in New Delhi ahead of the Navy Day celebrations on December 4.

But he also cleared the air about Russian newspaper Kommersant’s report that a US team was allowed onboard INS Chakra which had termed it as a “scandal” as Russia had leased the nuclear powered submarine to India.

Russian officials, too, had rubbished the Kommersant report claiming that India had not allowed any US team to tour INS Chakra, an Akula class submarine leased to India for a period of 10 years for about $700 million. The submarine is equipped to carry nuclear missile but under the lease agreement, India cannot station such weapons platform on the warship which can carry a crew of 80 officer and sailors. Powered by a 190 MW reactor, INS Chakra is capable of hitting over 30 knots and has a displacement of 12,000 tonnes.