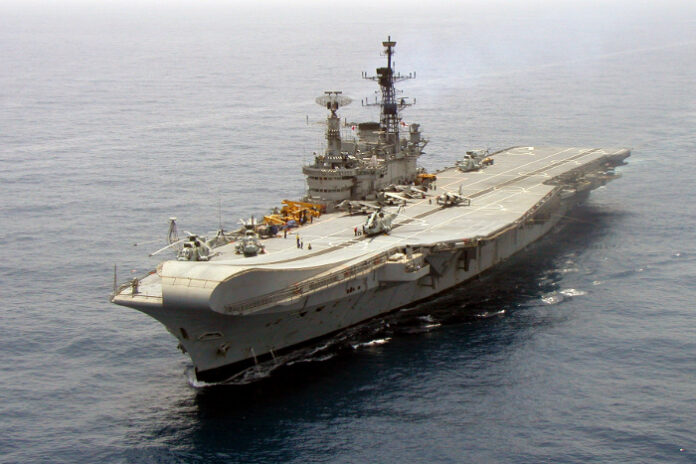 An emotional event. INS Viraat, the historic Aircraft Carrier with the longest service in the world, commenced its towed final journey on 19th September from Mumbai, to be broken at Alang in Gujarat and sold as scrap, Indian Express shared.

A look at the Grand Old Lady of Indian Navy, which was decommissioned in 2017 after 30 years of service with Indian Navy and around 27 years prior to that in British Royal Navy. She will report as “Romeo Two Two” for one last time.

INS Viraat was commissioned into the Royal Navy as HMS Hermes in November 1959, close to one and half decades after its keel was laid. During her service with the Royal Navy, the ship operated three fixed-wing planes and a chopper. The ship belonged to the Centaur class of light fleet carriers from the Royal Navy which were in use since World War II.

She was part of the key formation of the British forces during the Falklands War against the Argentinian forces in 1982. HMS Hermes was decommissioned within three years after the war. The Indian Navy, which was at the time operating 1961-commissioned INS Vikrant, zeroed down on Hermes and announced its purchase in 1985-86. The ship underwent a major refit and modernisation before being commissioned into the Indian Navy in May 1987 as INS Viraat, which means enormous.

The ship’s Motto was the Sanskrit phrase ‘Jalamev Yashya, Balamev Tasya’ which means ‘who controls the sea is the powerful’. The ship was capable of a maximum speed of 28 knots and underwent three major refits and some smallers ones during its 30 years long service with the Indian Navy in addition to the one prior to commissioning. The refits which are usually long processes, include complete overhaul, renovation and many upgrades of capabilities.

INS Viraat proved pivotal in Operation Jupiter in 1989 during the Sri Lankan Peacekeeping operation. Subsequently, the ship was affiliated with the Garhwal Rifles and Scouts of the Indian Army in 1990. The ship was also deployed during 2001-02 operation Operation Parakram following the terror attack on the Indian Parliament. She has also played a major role in calibrating the flying activities from the carrier, which proved to be of great help at the time of induction of INS Vikramaditya (previously Admiral Gorshkov), which is currently the sole aircraft carrier operated by Indian Navy. Viraat’s displacement, the indirectly measured weight of the ship, was 28,700 tonnes compared to Vikramaditya’s 45,500 tonnes.

At the time of its decommissioning in March 2017, the Navy had said, “Under the Indian Flag, the ship has clocked more than 22,622 flying hours by various aircraft and spent nearly 2252 days at sea sailing across 5,88,287 nautical miles or 10,94,215 kilometers. This implies that Viraat has spent seven years at sea, circumnavigating the globe 27 times. Since her inception, she has had a total of 80,715 hours of boilers running. ‘Mother’, as she was fondly referred to in the Navy, had been commanded by 22 captains since 1987. She was the Flagship of the Navy since her inception. Around 40 Flag officers including five Chiefs of Naval Staff were raised and groomed in her lap.”

With mounting operating costs and age, the Navy announced the decision to decommission Viraat in early 2015. After the requisite pre-decommissioning processes at Kochi Shipyard, the ‘Grand Old Lady’ was decommissioned on March 6 in 2017, in a ceremony held at Mumbai.

There were plans and even some movements by the state governments of Maharashtra and Andhra Pradesh governments at the time towards preserving the historic carrier and converting it into a museum. There were also crowdfunding efforts towards the same goal, which were unsuccessful. However, after not receiving any concrete bid towards preservation, the Centre decided to auction the ship to be broken and sold as scrap.

Since 2017, India has been operating a single carrier — INS Vikramaditya — as against the minimum essential operational requirement of having two Carrier Battle Groups — which are formations of ships and submarines with Aircraft Carriers at the lead role.