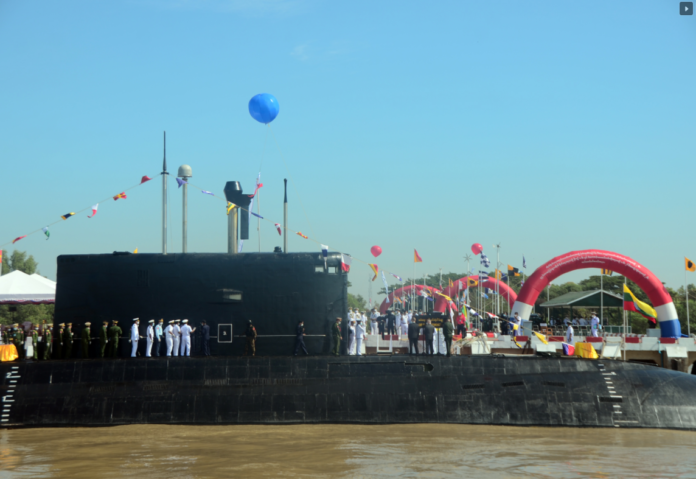 Myanmar Navy officially commissioned its first submarine on December 24, the date of the 73rd anniversary of the Myanmar Navy. INS Sindhuvir which was handed over by India in October was commissioned as UMS Minye Theinkhathu. During the ceremony at Yangon’s No 3 Naval Wharf in Thilawa, Myanmar Navy commissioned other six naval vessels as well, including a 49m Fast Attack Craft (492), 2 Yan Nyein Aung Class Submarine Chasers (443 Yan Nyein Aung and 446 Yan Ye Aung), an LCM (166) and two tugboats (AT-07 Naga Myan and AT-08 Naga Twak)

The event was attended by Commander-in-Chief of the Myanmar Armed Forces Senior General Min Aung Hlaing as well as diplomats from Russia and India.

The Kilo-class submarine has a displacement of 3000 tonnes, a diving depth of 300 meters, and top speed at 20 knots. UMS Minye Theinkhathu is named after an ancient warrior and can operate for 45 days. It is equipped with 40 km range wire-guided torpedoes and 3M-54 Klub anti-ship cruise missiles. Myanmar has built a submarine base for it in a highly classified location.