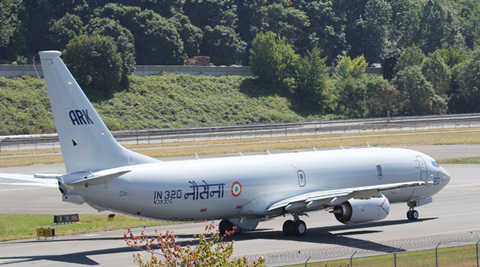 The Indian Navy is considering the acquisition of more Boeing P-8I aircraft for surveillance and Anti-Submarine Warfare (ASW), according to Navy chief Admiral Sunil Lanba.
In an interview to the magazine ‘India Strategic’, Admiral Lanba said that air surveillance capability is an important subset of naval operations and that while the proposal was on the table, he could not disclose the required numbers.
His predecessors have spoken of a requirement of 30 Long-Range Maritime Reconnaissance(LRMR) aircraft, under which the navy has already inducted eight aircraft and placed an order for four more.
The Navy had ordered eight P-8I aircraft in 2009 for $2.1 billion along with a training package. Weapons and torpedoes were extra as needed, and then, under the Options Clause, four more aircraft were ordered in August 2016.
The standard delivery schedule begins within three years of signing a contract and making the first payment. Boeing has said that it delivered the first lot of eight aircraft “on time, on cost” and helped set up their base at the INS Rajali Naval Air Station at Arakkonam in Tamil Nadu.
Boeing had been awarded a three-year contract in June last year for engineering and logistics support for the P-8I fleet. In January 2018, the Navy has been given approximately Rs 2,000 crore (almost $315 million) for a Training Solution along with a 10-year package for comprehensive maintenance service.
The training facility at INS Rajali will be the third of its kind after those in the US and Australia, and will train pilots, observers and ordnance and technical personnel. Spread over 60,000 sq ft, the facility would be completed by 2021.
A Training Simulator to be set up at the Naval Institute of Aeronautical Technology (NIAT), Kochi, for ab-initio training of the technical personnel is part of the package.
Built on the Boeing 737 frame, the P8-I is capable of detecting and destroying hostile submarines deep under the water. It has 11 hard points for carrying Harpoon anti-shipping missiles and depth charges, and five stations in the weapons bay for Raytheon-supplied Mk-54 torpedoes. Two hard points upfront are for Search and Rescue equipment.