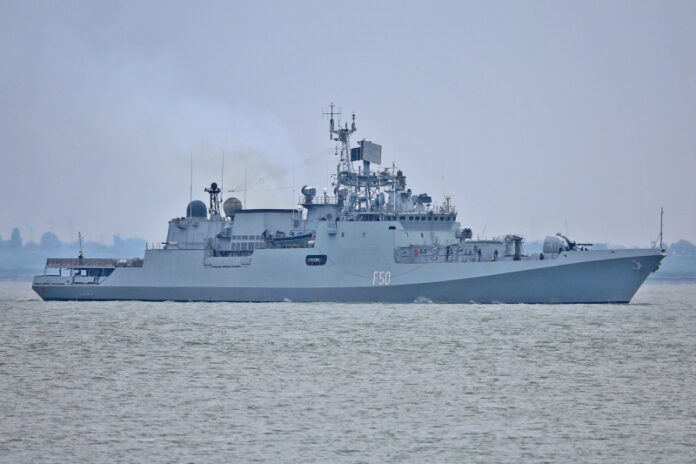 The Indian Navy frigate INS Tarkash has arrived Maputo, Mozambique, for a three-day of port-visit as a part of her route across the African coast.

The vessel arrived on 25 September and is expected to depart on the 28th. According to the Indian Navy, during the port call, Captain Sathish Vasudev will pay courtesy calls on various dignitaries and government officials including the Minister of National Defence, Chief of General Staff, Mozambique Defence Forces and Commander of the Mozambique Navy. Professional interactions are planned with the Mozambique Navy towards further enhancing co-operation between the two navies. In addition, social engagements, sports events and best practices will also be shared between the two Navies. Further, the ship will be kept open for visitors on 27 September.

“Mozambique and India have traditionally enjoyed warm and friendly bilateral relations, sharing common values of democracy, development and secularism. There have been regular high level exchanges and interactions in numerous fields between both countries,” the Indian Navy said.

The frigate, which left India in June, previously stopped in Nigeria for a three-day visit on 5 September, celebrating 60 years of diplomatic relations between India and Nigeria. Before that, Tarkash made a three day port call in Dakar, Senegal, from 27 August. In July, Tarkash was in Morocco for a friendly visit and also docked in Djibouti and Egypt. The vessel has made other visits to countries around the world, including South Africa. She has also contributed anti-piracy operations off East Africa.

INS Tarkash is expected back in India in October.

INS Tarkash (F50) is the second Talwar-class frigate constructed for the Indian Navy. She is part of the second batch of Teg-class frigates ordered by the Indian Navy. She was built at the Yantar shipyard in Kaliningrad, Russia. She was commissioned to Navy service on 9 November 2012 at Kaliningrad and joined the Western Naval Command on 27 December 2012.