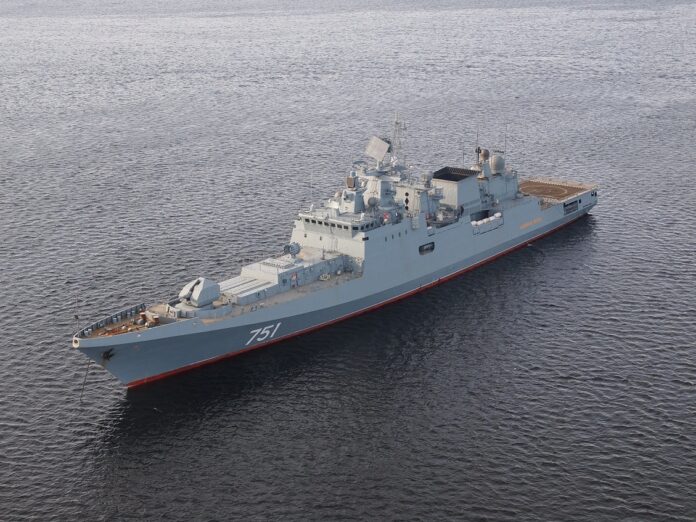 According to the Federal Service for Technical and Military Cooperation (FSTMC), Russia’s Yantar shipyard in Kaliningrad will deliver the first two modified Admiral Grigorovich-class (Project 1135.6P/M) guided-missile frigates to the Indian Navy in the first half of 2024.

“In accordance with the existing work schedule agreed by the sides, the Project 11356 frigates under construction at the Yantar Shipyard in Kaliningrad are due to be delivered to the Indian Navy by the end of the first half of 2024,” the FSTMC’s press office said in a statement released at the DefExpo international arms show in India on February 6.

Under an intergovernmental agreement concluded between India and Russia in October 2016, two frigates are to be built at the Yantar shipyard, while two additional frigates will be assembled at India’s state-owned Goa shipyard with technical support from Russia’s United Shipbuilding Corporation (USC).

The two countries signed a contract for the delivery of the first batch of two Admiral Grigorovich-class guided-missile frigates in October 2018. A follow-on contract for construction of the second batch of frigates in India was inked in January 2019. The deal is estimated to be worth over $2.5 billion.

The Goa shipyard is currently being upgraded to accommodate work on the warships. “In order to build the ships, it is necessary to further equip the Indian shipyard, develop and deliver the necessary documentation and train Indian specialists, including in the process of building the ships at the Russian shipyard,” FSTMC said.

As I reported last year, work on two modified Admiral Grigorovich-class frigates has already begun. All four guided-missile frigates are expected to be delivered to the Indian Navy by 2026.

Admiral Grigorovich-class ships are an upgraded variant of the six Talwar-class frigates that Russia built for the Indian Navy between 2003 and 2013. As I reported in 2019:

The frigates will be armed with the BrahMos cruise missile system fired from an eight-cell 3S-14E under-deck launcher. The two-stage BrahMos missile — named after the Brahmaputra River in India and the Moskva River in Russia – is a derivative of the Russian-made P-800 Oniks over-the-horizon supersonic anti-ship cruise missile.